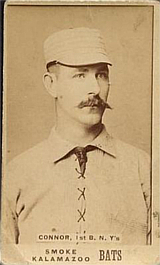 Inducted into Hall of Fame in 1976

"Roger Connor was a complete player — a deft first baseman and an agile base runner who hit 233 triples and stole 244 bases despite his size (6 feet 3 inches and 200 pounds)." - George Vecsey, New York Times 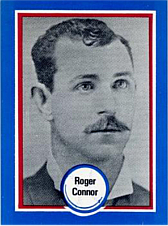 Roger Connor was one of the 19th century's great hitters and the game's first true slugger. The original home run king on his retirement (which would not be determined until well after his death), he had one of the longest careers in the 19th century, receiving nearly 8,000 at-bats over an 18-year career. He was variously referred to as "a demon batsman" and a "Swat King" in the press.

His first experience with baseball was on the sandlots and with the New Bedford, MA team in 1874. It was reported that he was once released by an amateur team in Waterbury, CT because, as a right-handed hitter, he did not hit enough. He subsequently learned to hit left-handed and became a switch-hitter. After his major league days, he was fit to play for a Waterbury nine finally, taking on player-manager reins for the Waterbury offering in the Eastern League.

It was with the minor league Holyoke Shamrocks, where his mammoth clouts into the Connecticut River became legend, that Roger caught the eye of Bob Ferguson, who signed him to the Troy Trojans for the 1880 season. Surrounded by young, future Hall of Fame talent (Dan Brouthers, Buck Ewing, Tim Keefe and "Smiling" Mickey Welch played with Troy in '80), Roger played all 83 games for the club, acquitting himself nicely at the plate with a .332/.357/.459 line. On the field, his 60 errors at third base prompted a position change to first base in 1881, where he played the overwhelming majority of his remaining games. On September 10, 1881, he etched his name in the record books with baseball's first grand slam at Riverfront Park in Rensselaer, NY. Facing Lee Richmond of the Worcester nine with the bases chucked and two outs in the bottom of the 9th, Roger brought everyone home with a blast to right field for an 8-7 victory. Thus, he had not only clubbed the first grand slam but the first walk-off grand slam, a feat that would not be repeated until, ironically, the man who wrested the career home run title from him, Babe Ruth, torpedoed the Chicago White Sox in similar fashion on September 24, 1925.

Roger moved to the Players League in 1890, along with several other star Giants, batting .349/.450/.548 with a career-best 133 runs scored and a league-leading slugging percentage. It was in the Players League he recorded his only cycle, bombarding the Buffalo Bisons on July 21st. With the league's dissolution after one season, he played another season back with the Giants in 1891, moving to the Philadelphia Phillies in 1892. He enjoyed his final 100-RBI season in 1893 back in New York, finishing his career with a few seasons as a member of the St. Louis Browns. On June 1, 1895, less than two years before his final big league game, he went 6-for-6 with two doubles and a triple against his old squad, the New York Giants. His career line shook out to .316/.397/.486 in 1,998 games, with 441 doubles, 233 triples, 138 home runs and 1,620 runs scored. Per similarity scores, the most similar player is contemporary and former teammate Dan Brouthers. Their similarities extended off the field: the duo were born within a year of each other, in the 1850s, and died within a couple of years of each other, in the 1930s.

After leaving the bigs, Connor was player (1897-1901), manager (1898-1901) and owner (1897-1903) of Waterbury baseball clubs. He later became an "inspector of public schools" until 1920. He was extremely well known in his hometown at that time, but was taken ill with a stomach illness for the last couple of years of his life, which ate away his savings to the point that surviving relatives could not buy him a proper headstone when he died in 1931 at the height of the Great Depression. That was only remedied in 2001, when a subscription by baseball fans and citizens of his hometown paid for an appropriate marker.

Roger held the record for most career home runs beginning in 1895, when he passed Harry Stovey, and remaining the king until Babe Ruth passed him in 1921. Connor finished his career with 138, and Ruth eventually set a new mark of 714. But... the fact that Ruth broke his record was completely ignored at the time, as there were no reliable statistics available for 19th century players. At various stages, the record was attributed to other players, including Brouthers and Gavvy Cravath. Roger's name was finally rescued from obscurity when Hank Aaron began his determined pursuit to topple The Babe in 1973. Thanks to the Baseball Encyclopedia, Connor's remarkable career numbers were now available and, within a couple of years, the Veterans Committee enshrined him in the Hall of Fame, in 1976. Another factor that hurt him was that two other 19th century first basemen were already in the Hall: Cap Anson and Brouthers. Voters probably thought the position was well covered, and he and Jake Beckley had to wait a very long time to be properly honored.

He is the brother of Joe Connor. A nephew, also named Roger Connor, played for New Britain in the Connecticut League in 1910.