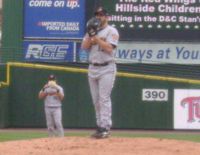 Matt Ginter was one of four pitchers selected in the first round of the 1999 amateur draft by the Chicago White Sox. Ginter appeared in a total of 96 major league games the White Sox, New York Mets, Detroit Tigers and Cleveland Indians. His last professional season was in 2009, with the Nashville Sounds of the Pacific Coast League. Ginter was a member of Team USA in the 1998 Baseball World Cup, posting a 5.40 ERA and one save in 3 games.

Ginter progressed rapidly through the White Sox system, making his major league debut in 2000, his second season of professional baseball. He won 11 games with a 2.25 ERA for the AA Birmingham Barons in 2000, but his ERA was 13.50 in seven games with the White Sox.

Baseball America rated Ginter the second-best prospect in the White Sox system prior to the 2001 campaign. He turned in another solid minor league performance, owning a 2.59 ERA in 76.1 innings with the AAA Charlotte Knights, but Ginter's numbers were once again inflated in the majors, with a 5.22 ERA in 20 games.

The White Sox rewarded Ginter with a spot in their bullpen in 2002, and he had a 4.47 ERA in 33 games. He also earned his first major league save. The club sent him back to AAA in 2003, where he saved 14 games with a 3.03 ERA. He only made three appearances with the Sox that year.

In the spring of 2004, the White Sox traded Ginter to the Mets for Timo Perez. Ginter made 14 starts with the Mets, winning one and losing three with a 4.54 ERA. He was traded to the Tigers in the spring of 200, for Steve Colyer. He posted a 6.17 ERA in 14 games with Detroit. He then spent the 2006 and 2007 seasons in the minors, pitching for four different minor league clubs in as many different organizations. He then signed with the Cleveland Indians before the 2008 season. He spent most of the year with the AAA Buffalo Bisons, where he went 6-6, 4.14 as a starter. He also started four games for Clevelan, going 1-3, 5.14; those were his last big league appearances.