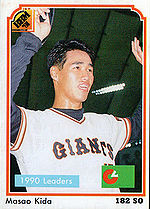 After becoming a free agent, Kida signed with the Detroit Tigers in November 1998. Kida struggled in his first year with Detroit in 1999 going 1-0 with one save and a 6.26 ERA in 49 games. In 2000, Kida only appeared in 2 games, not factoring in a decision and had a 10.22 ERA. He spent most of the season with the Toledo Mud Hens, for whom he was 2-1 with 7 saves and a 2.16 ERA, striking out 26 and walking just 4 in 25 innings of work. As he had failed in his two seasons with Detroit in the majors, he was released.

Kida returned to the majors in February 2003, signing with the Los Angeles Dodgers. Kida spent most of the season with AAA Las Vegas 51's, where he was 2-4 with a 5.02 ERA in 21 games as a swingman. He also pitched 3 times in the majors, making 2 starts, with a record of 0-1 and an ERA of 3.00 in 12 innings. Kida was involved in a auto accident the next February. He spent most of the 2004 season rehabbing from his injury. He was 3-1 for Las Vegas but had a 5.97 ERA in 9 games. He still did received a call-up by the Dodgers, but was designated for assignment after 3 appearances. The Seattle Mariners claimed him off waivers. Kida struggled with the Mariners in 8 games, not factoring in a decision, and had an 8.38 ERA. Kida spent most of the 2005 season with the AAA Tacoma Rainiers and had a good year, as he saved 22 games and went 3-6 with a 4.08 ERA in a league where no team had an ERA under 4.21. Masao was 5 saves behind league leader Brad Baker. Kida only appeared in one game at the major league level, not registering a decision, and had a 4.50 ERA. It was his last major league appearance.