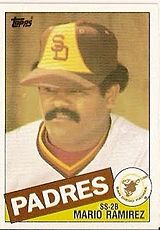 Mario Ramirez was signed by the New York Mets as an amateur free agent in 1976. A career utility infielder and a "glove man", he made his debut with the Mets in 1980, then was selected by the San Diego Padres in the 1980 Rule V draft after the season. He then played with the Padres for the next five seasons, largely as a back-up first to Ozzie Smith and then to Garry Templeton at shortstop. His busiest season was 1983, when he played in 55 games, hitting .196. His main teammates were Terry Kennedy, Tony Gwynn, Steve Garvey, Templeton and Alan Wiggins.

In 1984, he got his only taste of the postseason, getting into two games of the NLCS, during which the Padres beat the Chicago Cubs, after hitting .119 in 48 games in the regular season. He was not used in the 1984 World Series and was released after the 1985 season. Ironically, he hit .283, by far his highest batting average in the majors, in his final season, albeit in only 60 at-bats.