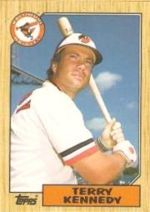 Catcher Terry Kennedy, a first-round pick in the 1977 amateur draft, played fourteen seasons in the big leagues and was on four All-Star teams. He hit over 100 home runs in the majors and was second in the 1982 National League in doubles with 42, playing for the San Diego Padres. 40 of those doubles were hit as a catcher, making him the first back-stop to ever accumulate that many in a season. The mark was broken by Ivan Rodriguez who hit 45 in 1996, but as of the end of 2014, there were still only 8 catchers who had hit as many in a season. He played in the 1984 World Series with the Padres and in the 1989 World Series with the San Francisco Giants, but was on the losing side both years.

His father, Bob Kennedy, played in the majors for nearly two decades and went on to be a big league manager and general manager. His brother, Bob Kennedy Jr., pitched in the St. Louis Cardinals chain and was later a scout for the Chicago Cubs.

When Terry had an RBI in the 1984 World Series, it marked the first time that both a father and son had World Series RBIs.