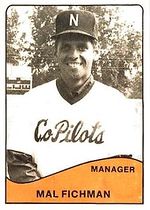 Manager Mal Fichman won three consecutive Frontier League championships with three different teams. He captured the first in 1994 with the Erie Sailors, added another with the Johnstown Steal in 1995, and won a third title in 1996 with the Springfield Capitals.

Prior to that he had made a speciality of managing unaffiliated teams in the lower minors. He had some good success certain years, including taking the Erie Sailors to the New York-Penn League finals in 1990, and much less other years, including a season with the Rocky Mount Pines in 1980 that ranks among the worst of the past 50 years in minor league baseball. In between stints, he ran a baseball school in Florida with Lou Haneles that looked to prepare players overlooked in the amateur draft for a career in minor league baseball. This baseball school was one of the main sources for players that Haneles, as owner, and Fichman, as manager, used to stock their teams in 1979-1980. Fichman's knack for finding overlooked talent became a real asset in the mid 1990s with the development of the Independent Leagues.

After 2000, Fichman was hired as a scout by the San Diego Padres to look for talent in the independent leagues. He did very well in this new capacity, and was later hired by the Philadelphia Phillies. In 2011 Fichman is the coordinator of independent league scouting for the Arizona Diamondbacks.

This page is in need of some additional content. Please help the Bullpen by expanding it, or learn how to contribute.
Retrieved from "https://www.baseball-reference.com/bpv/index.php?title=Mal_Fichman&oldid=1063919"
Categories: