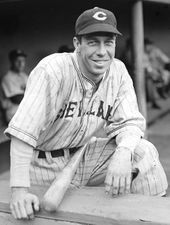 Lyn Lary was a shortstop who had a 12-year career in the majors, mostly during the 1930s. After his early years with the New York Yankees of Lou Gehrig and the aging Babe Ruth, he became a journeyman for the rest of his career.

He was a good basestealer, leading the 1936 AL with the St. Louis Browns, and often being in the top ten in the league, with a career success rate over 75%. He seldom got caught.

Lary never played in a World Series. The Yankee teams he played with, although they had Gehrig, Ruth, Bill Dickey, and others, usually didn't finish in first place except in 1932 when Lary appeared in 91 games in the regular season, and rookie Frankie Crosetti was beginning to take away the shortstop job from Lary.

The similarity scores method shows the most similar player as a contemporary - Billy Rogell.

When traded to the Cleveland Indians in 1937 by the St. Louis Browns, manager Rogers Hornsby of the Browns called Lyn and the other traded players (Moose Solters and Ivy Andrews) "real play boys". Perhaps so, but Hornsby had traded the top RBI man for the Browns, the leading ERA man for the Browns, and (in Lary's case) the top basestealer in the league. Hornsby, for his part, got Joe Vosmik, Oral Hildebrand, and Bill Knickerbocker.

Lary finished his career in the minors in 1941 and 1942, putting up unimpressive numbers for the Knoxville Smokies, Milwaukee Brewers and Buffalo Bisons.