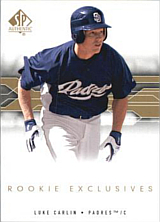 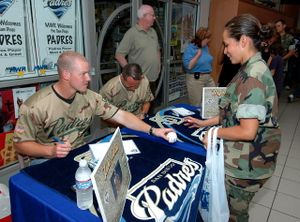 Carlin signs a baseball for a member of the military

Although born in the Washington, DC area, catcher Luke Carlin grew up in Aylmer, QC and eventually played for Team Canada. In the 2005 Baseball World Cup, he hit .250/.286/350 as the country's main catcher; Eric Langill served as his backup. He was drafted by the Detroit Tigers in the 10th round of the 2002 amateur draft and started his professional career with the Oneonta Tigers that summer.

After a number of seasons in the minors, he was called up by the San Diego Padres in early May 2008 to replace Colt Morton while Michael Barrett was on the disabled list. His first game was Greg Maddux's 350th victory; Trevor Hoffman got the save. Carlin told umpire Ed Hickox, "Can you believe this is my first game in the major leagues, and I'm catching two Hall of Famers? I couldn't have asked for a better story." His steady work behind the plate earned him additional starts despite hitting below .200 with copious strikeouts. His stay in the majors was extended when San Diego's other catcher, Josh Bard, injured an ankle in a collision at the plate with St. Louis' Albert Pujols, just as Barrett was about to return. Luke hit .149 in 36 games in his first big league season, then signed as a free agent with the Arizona Diamondbacks after the season.

Carlin's major league experience was a key factor in being added to Canada's roster for the 2009 WBC, to act as Russell Martin's backup behind the plate. He did not get to play as Canada was eliminated in two games. He got into 10 games for Arizona in 2009, hitting .167. He hit a lot better with the AAA Reno Aces, putting up a batting line of .321/.430/.481 in 72 games. He began the 2010 season in the Pittsburgh Pirates organization, hitting .239 in 63 games for the Indianapolis Indians, then was sold to the Cleveland Indians in early August. He hit .231 in 13 games for the Columbus Clippers and an uncharacteristic .357 with 2 homers in 15 at-bats with Cleveland in September. Back with Columbus in 2011, he hit .213 in 63 games but did not get to play in the big leagues. He made his final four appearances with the 2012 Tribe, batting 3-for-14.

Carlin became a manager with the Mahoning Valley Scrappers in 2017. He moved to the Lake County Captains in 2018.