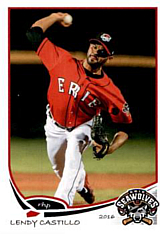 Lendy Castillo pitched 13 times for the Chicago Cubs in 2012.

The Chicago Cubs picked Castillo with the 6th pick of the 2011 Rule V Draft, following Rhiner Cruz, Terry Doyle, Lucas Luetge, Ryan Flaherty and Cesar Cabral. He made his MLB debut with a 6-3 deficit in the 8th inning against the Brewers. Castillo allowed a leadoff single to Mat Gamel, who stole second. He got Álex González to fly out (moving Gamel to third) then plunked Jonathan Lucroy. Carlos Gomez then laid down a squeeze bunt to score Gamel and Lendy was done. He made 13 appearances as a big leaguer, with a 7.88 ERA in 16 innings. The Cubs outrighted him off the 40 man roster prior to the next season and he never made it back up.