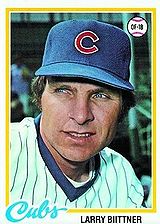 Outfielder/first baseman Larry Biittner played parts of 14 seasons in the majors and was regarded as one of the best pinch-hitters of his time.

“I’m nobody’s caddy. I should be playing somewhere... I don’t want to be stereotyped... Once you get the label you can’t play every day, it sticks. I’ve seen too many careers ruined that way, and I don’t want it to happen to mine.” - Larry Biittner, to The Sporting News, September 8, 1979

Biittner was drafted in the 10th round of the 1968 amateur draft by the Washington Senators and signed by scout Lee Anthony. He began his pro season that year with the AA Savannah Senators, hitting .286 in 58 games. He then served in the military from February to August of 1969, missing most of that season. He spent most of the 1970 campaign with the Pittsfield Senators, hitting .325 with 9 home runs. He also earned a cup of coffee with Washington that year, making his big league debut on July 17th and appearing in a pair of mid-season games.

Biittner began the 1971 season with the AAA Denver Bears but was back with Washington by mid-May. He got his first big league hit, a pinch-hit single off Vince Colbert of the Cleveland Indians on May 18th, and ended the year with a .257 average in 66 games with the Senators. He followed the club to Texas when they became the Texas Rangers and spent the next two summers playing there, in 1972 and 1973.

Following the 1973 season, Biittner was dealt to the Montreal Expos for pitcher Pat Jarvis. He started 1974 in the minors with the Memphis Blues and hit .327 in 94 games before being called up to Montreal in August. He saw regular playing time for the Expos in 1975 and posted a career-high .315 batting average. After a slow start in 1976, he was traded to the Chicago Cubs in May along with P Steve Renko in return for 1B Andre Thornton.

Biittner struggled in his first summer in Chicago, hitting just .245 in 78 appearances in 1976 but bounced back in 1977, hitting .298 with a career-best 12 home runs and 62 RBIs. He also made a brief pitching appearance out of the bullpen for the club in the first game of a doubleheader on July 4th of that year, facing his former team, the Expos. Entering the game down 13-3, he gave up six additional runs in an inning and a third, but did strike out three batters. He hit a game-winning walk-off home run in the Cubs home opener in 1978.

After the 1980 season, Biittner became a free agent and signed with the Cincinnati Reds; he was the first ever free agent signed by the Reds, who had until then abstained from the free agent market for what can be called ideological reasons. He hit just .213 in his first season in Cincinnati but bounced back in 1982, posting a .310 average in 97 games. Nonetheless, he was released by the Reds after that season and signed with the Rangers. He hit .276 in 66 games for Texas in 1983 in what would be his final season, ending his career in the organization where he began it. He finished his career tied for 12th on the all-time list for pinch hits with 96.

Biittner moved back to Chicago for a time following his playing days before returning to his native Iowa eventually. He came back to Wrigley Field to throw out the first pitch of a 2017 game. He died of cancer in 2022 at age 75. For his amateur skills, he is a member of the Buena Vista University Baseball and Basketball Halls of Fame, as well as the Iowa High School Athletic Association (IHSAA) Baseball and Basketball Halls of Fame.