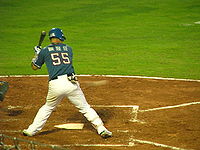 Kuan-Jen Chen is an outfielder for the Brother Elephants.

Chen was injured on Opening Day 2009 when he collided with a teammate in the outfield.