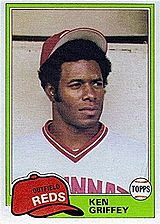 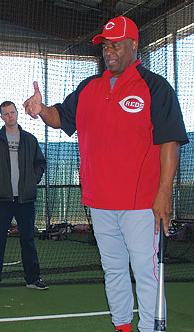 There was a time when the name Ken Griffey referred to only one player, an esteemed hitter who had a young son, Ken Griffey Jr., running around the clubhouse. He was a key player on the Cincinnati Reds teams of the 1970s and the New York Yankees teams of the early 1980s.

He played for the Reds from 1973 to 1981. He hit over .300 with them six times. Along with George Foster and Cesar Geronimo, he filled out the outfield for the great Reds teams that won the World Series in 1975 and 1976 and which were known as the "Big Red Machine". In 1976, he was 2nd in the league in batting average and 8th in the MVP voting.

Moving to the New York Yankees at the age of 32, he played 4 1/2 years with them before moving to the Atlanta Braves. After playing parts of three seasons with Atlanta, he moved on to play parts of three seasons back with Cincinnati (beginning at age 38), before finishing up with the Seattle Mariners in 1990 and 1991, where his son Ken Griffey, Jr. was now a regular. He was the first of two fathers to play with his son in the same major league game (Tim Raines is the other). He received a World Series ring for the Reds' 1990 World Championship, even though he was no longer a member of the team by the time the World Series rolled around.

His lifetime batting average of .296 is excellent, and he appeared in nearly 2,100 games with over 2,100 hits in a career of 19 seasons. Ken Griffey Sr. and Jr. hold the record for the most hits by a father-son duo (4,924). They also rank second to Bobby Bonds and his son Barry in many other offensive categories. He had moderate power, with 364 doubles and 152 home runs. He appeared in three All-Star Games but never won a Gold Glove, and was inducted into the Cincinnati Reds Hall of Fame in 2004. The most similar players by the similarity scores method are Felipe Alou and Amos Otis.

Following his playing days, Griffey remained with the Mariners as a coach in 1993 and was a member of the coaching staff of the Colorado Rockies in 1996. He returned to the Reds as a coach from 1997 to 2001 and was joined by Junior (who the Reds acquired in a trade) for his last two seasons on the team's staff. Griffey was a coach for the Dayton Dragons in 2010.

The senior Griffey has been involved with the US State Department's "Sports United" sports visitor program, to encourage positive life skills in foreign youth.