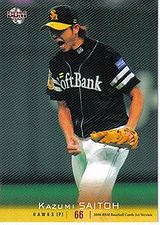 Kazumi Saitoh was the first two-time Sawamura Award winner in Pacific League history. His career record through 2006 is an amazing 73-20.

Saitoh's brother introduced him to baseball and his favorite player as a kid was Kiyoshi Nakahata. Saitoh became a pitcher in 9th grade and was a first-round draft choice of the Daiei Hawks in 1995. He battled shoulder problems for the next several years and Daiei officials considered making him a left fielder (he played some outfield in ni-gun) but Saitoh insisted on sticking to pitching. He got into one game with Daiei each year from 1997-99 (and pitched for the West Oahu CaneFires in 1997) and had shoulder surgery in 1998. In his first extended look with the Hawks, he went 5-2 with a 4.13 ERA in 2000. He pitched four scoreless innings in the 2000 Japan Series, spread out over three appearances. The next year, the 23-year-old hurler was 0-1 with a 4.43 ERA and was sidelined once more by shoulder problems. He went 4-1 with a 2.94 ERA in 10 starts for the 2002 Hawks.

Kazumi got the Opening Day call for Daiei in 2003 and put the first three batters on base, then struck out the side. He had a great year, putting up a 20-3, 2.83 line and became the first 20-game winner in the Pacific League since Yoshinori Sato in 1985 and set a Nippon Pro Baseball record with 16 consecutive victories. The record would fall a decade later thanks to Masahiro Tanaka. He tied Daisuke Matsuzaka for the ERA title, the first such tie in Nippon Pro Baseball history. Saitoh made the Best Nine, got his first All-Star selection and won his first Sawamura Award (split with Kei Igawa, the first tie in 37 years). He was 0-1 with a 4.26 ERA in the 2003 Japan Series, dropping game five, but Daiei went on to win the title. Saitoh calls it his happiest moment in baseball.

Kazumi absolutely reversed course in 2004, having the worst ERA ever by a qualifier in NPB history (6.26), though his record was still 10-7. He led the PL in runs allowed (100) and earned runs allowed (96) despite spending five weeks in ni-gun.

In 2005, Saitoh bounced back with a 16-1, 2.92 campaign after a late start due to shoulder pain. He won his first 15 starts, a record, and his 15 consecutive victorious decisions tied a 24-year-old record. No other NPB pitcher had ever had two winning streaks of 14+ games before. He was third in the PL in wins behind Toshiya Sugiuchi and Fumiya Nishiguchi.

Saitoh kept on rolling in 2006 despite a NPB rule change adopting international pitching rules that forced Kazumi to alter his delivery. He had a 18-5, 1.75 record, walked 46 and fanned 205 in 201 innings. He won the pitching Triple Crown and also led in shutouts (5) and innings pitched. He made his second Best Nine and second All-Star team and won his second Sawamura Award. On June 8, he pitched a one-hitter and faced the minimum 27 batters. In the post-season, he lost two dramatic 1-0 decisions, to Daisuke Matsuzaka on October 7 and, on October 12, to the Hokkaido Nippon-Ham Fighters in the bottom of the 9th to send Nippon Ham to the 2006 Japan Series. He gave himself the blame for the club's defeat (though the offense clearly was responsible) and had to be carried off of the field by Julio Zuleta and Jolbert Cabrera. He got more first-place votes for the Pacific League 2006 MVP than anyone else but Michihiro Ogasawara edged him overall. He missed the 2006 Japan All-Star Series due to shoulder problems.

On April 26, 2007, Saitoh was removed from the Hawks active roster due to fatigue in his pitching shoulder and could be out of action for a prolonged period. He came back in July and looked healthy again, but said that it was taking longer and longer for him to rest up between starts. With inconsistent pitching in the Hawks rotation from everybody except Sugiuchi--and even he faded late in the season--Saitoh's inability to make his scheduled starts hurt SoftBank as they stumbled to a 2nd consecutive 3rd-place finish. In the playoffs, Saitoh was roughed up by the Chiba Lotte Marines, and the Hawks eventually fell 2 games to 1 in the First Leg of the 2007 Pacific League Climax Series.

Some Koreans in Japan have claimed that Saitoh is of Korean heritage but has covered it up like many other Japanese baseball players (and Japanese people in general). There has been no verification of this rumor. Saitoh was involved in a messy divorce when his wife alleged that he was unfaithful to her. His hobbies involve computers and his favorite food is curry.