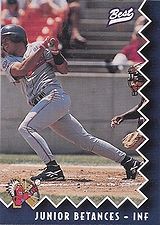 Betances has also has been a scout for the Indians, signing Alexander Perez, Abner Abreu and Francisco Jimenez.

This page is in need of some additional content. Please help the Bullpen by expanding it, or learn how to contribute.
Retrieved from "https://www.baseball-reference.com/bpv/index.php?title=Junior_Betances&oldid=1222397"
Categories: