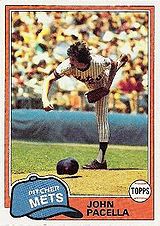 Originally selected by the New York Mets in the fourth round of the 1974 amateur draft, Pacella won 12 games for the Lynchburg Mets in 1976. He reached the majors as a September call-up by the Mets the following year, 1977, making his big league debut on his 21st birthday and getting into 3 games. After spending 1978 back in the minors, he appeared in 4 late-season games for New York in 1979. He was a part of the Mets staff for the entire 1980 season, going 3-4 with a 5.14 ERA while splitting time between the rotation and the bullpen. After the season, he was dealt to the San Diego Padres along with Jose Moreno for Randy Jones.

Prior to the 1981 season, Pacella was traded again, going to the New York Yankees as part of a six-player deal. With the Columbus Clippers that year, he was 11-9 with a 4.47 ERA. He then got into 3 big league games with the Yankees in 1982 before being traded to the Minnesota Twins in May. After the deal, he made 21 appearances for the Twins, going 1-2 with a 7.32 ERA and 2 saves. That November, he was again dealt, heading to the Texas Rangers for Len Whitehouse.

Before the 1983 season, Pacella was released by the Rangers, and he signed with the Baltimore Orioles that July. He earned another cup of coffee in the majors with the O's in 1984, getting into 6 games. Let go by Baltimore at the end of the year, he caught on with the Detroit Tigers. He pitched for the Nashville Sounds the next two summers, leading the American Association with 17 saves in 1986. He also got into 5 big league games for Detroit that year and recorded 1 save for them.

After his playing days, Pacella managed several seasons in the independent leagues. He later became an instructor at Big League Baseball School in Worthington, Ohio.