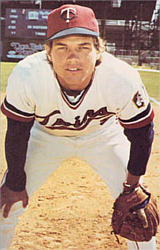 "When I was 24 and in the majors, I felt invincible. I thought I could play until I was 45" - John Castino

“Just when you think you’ve seen him make his best play, he makes another one... I could think of only two other third basemen I’ve seen who could make those plays—Brooks Robinson and Billy Cox.” - Gene Mauch

John Castino was the 1979 American League Rookie of the Year, but his promising career was cut short due to chronic back pain.

John became the Twins' regular third baseman out of spring training in 1979, sharing Rookie of the Year honors with Alfredo Griffin of the Toronto Blue Jays. He played in 148 games, although he had only 393 at bats. His batting line was .285/.331/.397 with 8 triples. Those Twins were managed by Gene Mauch and players included Jerry Koosman, Roy Smalley, Rob Wilfong and Ken Landreaux. The next year, 1980, was even better for Castino. He hit .302/.336/.430 in 150 games, with 13 home runs, 7 triples and 67 runs scored. In both 1979 and 1980, he was second in the league in sacrifice hits. In 1981, Castino led the league with 9 triples in a strike-shortened season and hit .268/.301/.396 in 101 games. On September 2nd, his career hit its turning point. Diving for a ball off the bat of Dave Winfield of the New York Yankees, he felt pain and was forced to get an x-ray which discovered a hairline fracture in his vertebra that had exacerbated a previous condition that went undetected, called spondylolysis. John underwent spinal fusion surgery, a surgery that has ended the career of professional wrestlers who put their bodies on the line taking bumps all year round. Yet, improbably, he was ready to go in spring training in 1982.

Castino went back to college, getting his degree with honors from Rollins College at the end of the 1984 season. He went on to earn an MBA from the College of St. Thomas. In 1987, he became an investment advisor. As of 2005, he was senior vice president at Wealth Enhancement Group in Wayzata, MN, where he worked with his cousin Jay Feely, a former NFL kicker.