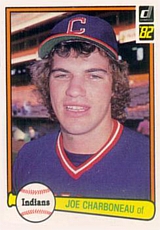 "Entering the 1980 season, 20th century baseball fans had likely never seen a player quite like Joe Charboneau. Honestly, we haven't seen one since." - from the start of a 2017 article [1] about Charboneau, mentioning some of his 'madcap adventures'

"A Bad Boxer: He was a bare-fisted fighter in boxcars on the wrong side of the tracks near the migrant workers camp outside of Santa Clara. He fought about twenty-five times for a $30 prize and usually lost."

"A Bad Eater: He was watching TV and saw a snake swallow a whole egg, one big gulp. Charboneau told his friends he could do it. They bet against him. He went to his refrigerator, took out an egg, stuffed it in his mouth, and nearly gagged to death. 'My buddies kept whacking me on the back until the eggshell broke and I could swallow it,' he said. 'I never did that again.' But he did eat cigarettes for money. 'I ate six, nonfiltered. Threw up and collected five bucks for it.' He tried to eat a shot glass but cut up his gums and had to spit it out."

"A Bad Doctor: He got cut while climbing a fence and didn't want to go to the doctor. He tried to sew up the cut with a needle and fishing line. He also once fixed his broken nose with a pair of pliers."

"A Bad Dentist: He once pulled out a tooth with a pair of pliers. He used a bottle of whiskey to dull the pain."

"A Bad Dresser: When the Indians came to Cleveland for their Meet The Tribe banquet, Charboneau was supposed to wear a suit ad tie. All he had was a shirt and a pair of pants he'd bought from the Salvation Army for $20. He also wore a ninety nine cent tie with a shark on it." - Terry Pluto, on just taste of Joe's adventures, from The Curse of Rocky Colavito 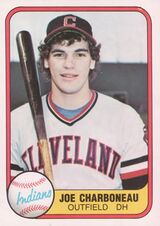 Robert Frost and "Super Joe" Charboneau never crossed paths. But Frost's 1923 poem, "Nothing Gold Can Stay", about how nothing perfect or beautiful will last, perhaps best encapsulates the brief, dizzyingly high and almost immediately low career of the 1980 American League Rookie of the Year.

Originally a Minnesota Twins draft pick, Joe did not sign until being taken by the Philadelphia Phillies in the secondary phase of the 1976 amateur draft, debuting with the Spartanburg Phillies. There, the legend began. While in a bar with teammates, Joe performed tricks, opening beer bottles with his forearms before graduating to his eye socket, leaving a scar under his right eye. While he never tried that again, he did discover he could drink beer through his nose. He started 1977 not playing as much as he would have liked and finished the season working at a Toys 'R' Us warehouse, suspended for insubordination. Given just one more chance with the Visalia Oaks in 1978, he hit .350 to lead the California League in hitting. Following that season, he was traded to the Cleveland Indians for pitcher Cardell Camper. Charboneau did not let down with the Chattanooga Lookouts in 1979, clubbing 21 home runs while leading the Southern League with a .352 average.

Due to an injury to Andre Thornton, he had a serious chance to stick with Cleveland in 1980. But first, prior to a spring training game in Mexico, Joe had to build his legend even more. While waiting for the team bus for a game on March 8th, Joe was approached by a man with a pen and piece of paper in his hand. Joe, assuming the guy wanted an autograph, was more than happy to oblige. Instead, he was stabbed in the gut with a Bic pen. He spent a brief amount of time in a local hospital, picked his assailant out of a lineup, and was improbably ready to go just a month later. He made his major league debut on Opening Day, April 11th, hitting a home run off Dave Frost of the California Angels, and on April 19th, he went 3-for-3 with a homer against the Toronto Blue Jays. As his star began rising, "Super Joe" was suddenly bombarded with requests for his time and his head was spinning adjusting to big city life. Having been approached by an Indians super fan named Dan Donnelly in spring training, the two struck up a rapport, with Dan becoming likely the first and only fan to become a player agent. Overall, he hit .289/.358/.488 with 23 home runs in 131 games for the Tribe and was named Rookie of the Year. He was featured in People, Sports Illustrated and Us magazine. A book and a song, "Go Joe Charboneau", were written about him and he was drowning in Cleveland-area endorsements. People could not get enough of him and stories about him. Joe had seen the top of the mountain... and it was good.

The next season started with a pop... a pop in his back. Sliding headfirst in a spring training game in 1981, Joe was seriously injured and received conflicting advice from doctors. One, not affiliated with the Indians, felt he ruptured a disc. The Indians doctor felt it was merely a strain and he would be good with a few days rest. With a hefty raise following his rookie season, Joe felt he owed it to the team to play. He struggled monstrously, looking to be in extreme pain while hitting .210 with 4 home runs in 48 games. He spent time back in Triple A with the Charleston Charlies, becoming the first Rookie of the Year to return to the minors the year after his win. Trying to make his way back, he slept on a cot in the Charlies' clubhouse. He had back surgery in the off-season and made the team out of spring training in 1982 by hitting .330. But his gift was gone. No longer the center of attention, he struggled, hitting .214 in 22 big league games, his last on June 1st. Joe spiraled all the way down to Double A, where he preferred to be over Triple A, as he hoped he could find his magic back with the Chattanooga Lookouts. He did not. In 1983, the dream was about over, ending in typically Super Joe fashion. With the Double A Buffalo Bisons, he entered a contest with Bisons fans and the San Diego Chicken involving a race around the bases eating chicken wings, legs of chicken and ribs, finishing with some cold suds of beer at home plate. Joe destroyed the competition, then had a game to play. He meekly grounded to the pitcher, loafed to first base and was booed. In response, he flipped the crowd off and was released a few days later. He played in the Pittsburgh Pirates organization in 1984, also appearing on the silver screen as a teammate of Roy Hobbs in The Natural. But he washed out in 1985 spring training, having shattered his ankle.

Despite his short career, Joe was named to "The Top 100 Greatest Indians Roster", as created by the Indians, in 2001. He is still fondly remembered all these years later for his exploits.

Super Joe has done some coaching since his playing days. He was the hitting coach for the Windy City ThunderBolts of the Frontier League when the team went on a monstrous losing streak at the end of the 2004 season. Manager Steve Maddock quit after suffering 15 consecutive losses and Charboneau replaced him. The team lost its last five games under him to finish the year on a 0-20 skid. It proved the only managerial experience of Charboneau's career. As of 2008, he worked for the recreation department in North Ridgeville, Ohio.

"..baseball is full of peaks and valleys. When you're hurt, it's even valleyer." - Joe Charboneau

Sources include: The Curse of Rocky Colavito by Terry Pluto.