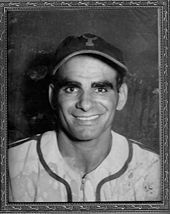 Joe Tuminelli played minor league baseball for seven years. He was also active in the Panama League and is called an "honorary Panamanian" by Dave Roberts. He debuted in 1946 with the Nashua Dodgers, playing five games, then moving to the Portland Gulls. He hit .335/~.378/.517 overall that year in the New England League and had a better OPS than league MVP Roy Campanella. He had 18 errors in 44 games at second base. In '47, Joe hit .309 for the Portland Pilots.

He moved to the outlaw Provincial League, playing for the Cubs de Drummondville alongside the likes of Max Lanier, Sal Maglie and Vic Power. He hit .302 in '48 and .327 the next year, playing third both seasons.

Tuminelli was the MVP of the 1950 Caribbean Series. His two homers and seven RBI were the most in the tournament, though his average was .240 for the champion Carta Vieja club of Panama. Panama would not win another Caribbean Series until 2019.

Returning to Organized Baseball in 1950, Joe split the year between the Tampa Smokers and Fort Lauderdale Braves, hitting a combined .294/~.358/.421 in the low-scoring league. His 33 doubles tied for the most in the Florida International League that year and his .943 fielding at third was the best of anyone to play 100 games at the position.

In '51, Tuminelli hit .263 for Fort Lauderdale and .286 with the St. Hyacinthe Saints, smacking 8 homers at both stops. He returned to the Caribbean Series and batted .208 as the third sacker for Carta Vieja. In 1952, the veteran infielder hit only .241/~.308/.389 with the Harrisburg Senators. In the 1953 Caribbean Series, he went 2 for 8 with a double and two steals as a part-timer for the Panamanian club. Tuminelli won the Triple Crown in the '53 Wisconsin State League, batting .390/.513/.667 with 28 homers, 123 runs, 30 steals, 87 walks (only 24 strikeouts) and 148 RBI for the Fond du Lac Panthers. Steve Demeter was the closest in RBI, 25 behind, while Ben Mateosky was two homers behind Joe. He led the league in runs, was second in OBP to Wayne Blackburn, led in slugging by almost 100 points and tied for fourth in steals. He led the Panama League in average in 1953-54 (.346) for the Chesterfield Smokers. Added to the Carta Vieja Yankees roster for the 1954 Caribbean Series, batting .391 with 4 runs, 3 RBI and a steal. He tied for second in the Series in average, matching Sam Chapman and Angel Scull. Tuminelli wrapped up in very limited time for the 1954 Erie Senators. He returned for another appearance in the Caribbean Series in 1956, going 2 for 3 with a double, two runs and an RBI as a bench player for Panama to go 24 for 83 (.289) in his Caribbean Series career.

I pitched against Joe in 1953 when he played for the Fond du Lac Panthers of the Class D Wisconsin State League. Joe was a veteran player, nearing the end of his career, but an excellent hitter with good power. He may have led the league in hitting that year. I believe he was a third baseman. He may have also played in Canada prior to 1953. ---User:Pitcher53