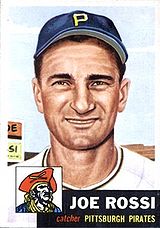 Joe Rossi started his pro baseball career right out of high school as a free agent in 1941. He signed to play with the Merced Bears of the California League, appeared in 8 games and hit .381 his first year out. Over the next few years he was with several teams in different leagues. His first good year came in 1946 with the Tyler Trojans of the East Texas League where he played in 111 contests and hit .325 with 9 homers.

He came right back in 1947, playing with the Waco Dons and the Shreveport Sports and hit .332 with 20 round-trippers. From 1948 through 1951, he hit for a four-year average of .325 with the Spokane Indians and the Portland Beavers, with 38 homers. This opened the door for Joe's entrance into the major leagues and the story that goes with it. On November 19, 1951, Rossi was drafted by the Cincinnati Reds from the Portland Beavers of the Pacific Coast League in the 1951 Rule V Draft.

The story goes that the famed Rogers Hornsby, who was managing the Seattle Rainiers at the time in 1951, said that Rossi would never make it in the majors. But after a good year with Portland, the Reds gave him a shot in 1952 and he hit .221 in 55 games. Hornsby had recently been let go as manager of the St. Louis Browns and arrived at Crosley Field for a Hall of Famers celebrities night. Joe let the great "Rajah" know that he was now a big leaguer. But wouldn't you know it... the Reds fired manager Luke Sewell a few weeks later and replaced him with Hornsby and Joe was soon gone from the majors. After the season, Rossi was traded by the Reds, along with Cal Abrams and Gail Henley, to the Pittsburgh Pirates in return for Gus Bell.

Rossi stayed in baseball, probably hoping that lightning would strike his bat again or better yet, Hornsby. Joe was 32 in 1953 and spent the year with the Toronto Maple Leafs of the International League, hitting .257 and catching 76 games. In 1956 he tried his hand as player-manager of the Spokane Indians of the Northwest League, but they finished last with a 56-77 record, 31 games back; Joe managed to catch 96 games, hitting .316 with five homers. In 1957, at age 36, he decided it would be his 14th and last year in pro baseball. He went out strong, hitting .307 for the Modesto Reds with 106 base hits in 345 at bats, catching 93 contests.

After baseball Rossi became harbor master at the Point San Pablo Yacht Harbor until the early 1970s. Later he owned a pawn shop in in Richmond, CA. He died February 20, 1999, at age 74, in Oakland, CA.