Joe Lewis was born in Fall River, Massachusetts where he grew up on Cherry Street. He first started playing baseball for Sacred Heart School in that city before attending Coyle High School, a parochial school in Taunton, MA. "Skippy" became a pitching standout his junior and senior years at Coyle, 1948 and 1949. He broke and held the record for high school strikeouts at 23 in one game and 40 in two consecutive in 1949. After four starts, he recorded 81 strikeouts. He also pitched in the New England Newspaper Leagues and Tournaments.

In 1949, Lewis was offered a pro contract from the Chicago White Sox for a $50,000 bonus. He was also offered contracts from a majority of the other major league teams. He turned them all down to play baseball at Duke University in 1949. In going to Duke, he played for former major leaguer Jack Coombs, alongside Dick Groat. 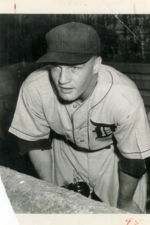 In 1953, Joe signed with the Detroit Tigers and played for the Durham Bulls under Marv Owen. A teammate there was future Tiger George Alusik. Lewis went 8-8 with a 3.18 ERA.

Drafted into the Army at the end of the season, Joe spent 1954 and 1955 playing baseball with the Occupation Forces in Germany. He broke the record for strikeouts in the All-Army Championship in 1956 with 20 in a tournament game.

After being discharged, he went back to Durham under manager Johnny Pesky and was 4-2 with a 2.51 ERA. His arm failing, he bounced around the minors until 1958 playing in Birmingham (1-3), Charleston, WV (0-2), and Victoria, Texas (3-1) before being released by the Detroit Tigers in May 1958. He returned to college at Elon and finished his degree.

In 1961, he obtained a job teaching in his home city of Fall River and secured a job as assitant football and baseball coach. In 1963 he took over the head coaches job for the Durfee High School baseball team until retiring from baseball in 1981. The Durfee High School baseball team won the state championship in 1971 under his guidance, with the help of future major league pitcher Mark Bomback. "Skippy" also coached the Chatham A's in the Cape Cod Baseball League from 1963 until 1969. Some of his former players were Tom Grieve and Thurman Munson.

In 1971, he signed with the Detroit Tigers to manage in their minor league system. In 1970 and 1971 he managed the Batavia franchise of the New York-Penn League. In 1972, he took over the Bristol Tigers in the Appy rookie league. He managed such up-and-coming Tigers as Mark Fidrych, Lou Whitaker, Alan Trammell, Jerry Manuel, Lance Parrish and many others. He managed many of the members of the 1984 Tigers who won that year's World Series.

When he retired from managing in 1981, he continued to scout for the Detroit Tigers where he was held firm in the organization. In 1992 he retired early from the Fall River school system and devoted all his time to scouting for the Tigers.

In 1996 he passed away from cancer. In 1997 the Fall River School system dedicated the Durfee High School baseball field in his name. Mark Fidrych was there for the ceremony, being one of Skippy's former players in the minors. The sign on the field reads "Joseph W. "Skip" Lewis Jr. Memorial Baseball Field, An Educator, Coach, and Friend to all."

His son wrote his biography which is entitled: "A View from the Mound, My Father's Life in Baseball." Lewis's father Joe Lewis Sr. scouted for almost 50 years.