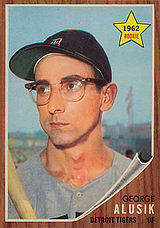 Born in Ashley, Pennsylvania, Alusik grew up in Elizabeth, New Jersey and was first signed by the Detroit Tigers prior to the 1953 season. He reached the majors as a September call-up in 1958, going 0-for-2 in 2 games. He was back in the minors until 1961, when Detroit brought him up late in the season. Facing the Baltimore Orioles on August 15th, he got his first major league hit, a single that drove in the game-tying run off Billy Hoeft. Overall, he got into 15 games for the Tigers, hitting .143.

Alusik started 1962 back with Detroit, but after appearing in just 2 games, his contract was purchased by the Kansas City Athletics. From August 7 to August 11, he homered in five consecutive games, tying a club record (later broken by Frank Thomas). He had his best season that year, hitting .270 with 11 home runs in 92 games between the two teams. He hit 9 homers in 1963 and played in a career-high 102 games in 1964. In early 1965, he was traded to the San Francisco Giants, and he hit .206 in 53 games for the Tacoma Giants that year.

His brothers, John, Joe and Steve Alusik, played in the minor leagues.