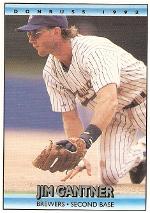 Jim Gantner had a 17-year career in the major leagues, primarily as a second baseman, with the Milwaukee Brewers. He was part of the Brew Crew that went to the 1982 World Series. He hit .333 in the Series, batting eighth in the order.

Gantner is the most prominent major league player to come out of the University of Wisconsin-Oshkosh, which also has sent Jarrod Washburn and Gary Varsho to the majors.

As a rookie, Gantner's teammates included 42-year-old Hank Aaron and 20-year-old Robin Yount. Yount would play with Gantner on the same team from 1976 to 1992. In Gantner's last year, among the youngest players getting a cup of coffee on the team that year was 22-year-old Jose Valentin.

In 1979, Gantner made an appearance as a pitcher. He replaced third baseman Sal Bando in a blowout loss to the Kansas City Royals. On June 23, 1980, he hit his first major league grand slam. In 1987, he had four game-winning RBI.

Based on the similarity scores method, the most similar players to Gantner are Cookie Rojas and Manny Trillo.

After his career, Gantner ran the River Coffee House, and Hale Park Automotive Services, both in the Milwaukee area, and worked with the Brewers as a coach; he was the team's first-base coach in 1996-1997. In October 2006, the Wisconsin Woodchucks of the college-age Northwoods League announced Gantner would be their field manager for 2007, his first managerial job.