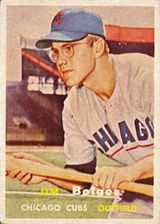 The 1,000th player to wear the uniform of the Cincinnati Reds, Jim Bolger was a highly regarded outfield prospect when he was signed out of high school by his hometown team on June 20, 1950. He appeared briefly for the Reds that season at age 18, but his career was set back by a broken ankle the following year. In October 1951 Jim was traded by Cincinnati to the Buffalo Bisons of the International League for Tom Acker and Moe Savransky. In 1952, Bolger spent time with three different clubs, the Class A Williamsport Tigers, Class B Burlington Flints and AA Little Rock Travelers. He was used sparingly and the Reds bought him back from Buffalo on October 13th. He was with the Columbia Reds in 1953, where he hit .301 with 10 home runs, and appeared with the Tulsa Oilers in 1954, hitting .311. He made another brief appearance with Cincinnati at the tail-end of the 1954 season, where he got into five games, getting one base hit in three trips. On October 1st, he was traded again by the Redlegs, with Harry Perkowski and Ted Tappe, to the Chicago Cubs for Johnny Klippstein and Jim Willis.

Bolger was with the Cubs for the entire 1955 season, hitting only .206 in 160 at bats and was to spend 1956 in the Pacific Coast League with the Los Angeles Angels. Jim hit .326 for the Los Angeles club and was called back to the Cubs in 1957. Jim hit .275 in 1957, leading the league as its top pinch hitter with a .354 average, picking up 17 hits off the bench. But he fell off to .225 in 1958 and was traded again, this time to the Cleveland Indians, along with John Briggs, for Earl Averill and Morrie Martin. He saw little action with the Indians in 1959 and, on June 6th, they passed him on to the Philadelphia Phillies, with cash, for Puddin' Head Jones. Jim got into 35 games with the Phillies, mostly as a pinch-hitter, hit .083, and his seventh year in the major leagues was to be his last. He finished up appearing in 312 games with 612 at bats, 140 hits for a .229 career batting average.

Bolger retired and resided in Cincinnati where he was an office manager for Minute Men Staffing Services, a temporary employment agency. He died in April 2020 at the age of 88.

This biographical article is missing the person's: death place
Retrieved from "https://www.baseball-reference.com/bpv/index.php?title=Jim_Bolger&oldid=1193968"
Categories: