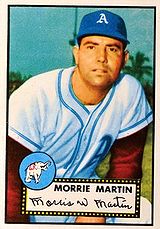 Morrie Martin pitched 10 seasons in the big leagues. In his best year he was 11-4 for the Philadelphia Athletics in 1951.

Martin, an eighteen-year-old farm boy from Dixon, Missouri, was signed by the Chicago White Sox as an amateur free agent before the 1941 season. The lefthander was assigned to the Grand Forks Chiefs and had a 16-7 record on top of leading the class C Northern League with a 2.05 ERA. He was also chosen for the league's All-Star team. The White Sox sent him to the St. Paul Saints in 1942 where he fell to 1-4 with a 4.69 ERA in only 25 appearances in the American Association.

Morris then entered the United States Army where he spent from December 12, 1942 through December of 1945 in the European theater of operations during World War II.

It took Morrie nine years to toe the rubber in the major leagues. The Brooklyn Dodgers obtained him in 1945 as part of a minor league working agreement and he got his first shot at the big leagues in 1949 with the Dodgers, appearing in 10 games with a 1-3 record.

Martin spent the 1950 season back with St. Paul before he was drafted by the Philadelphia Athletics from the Dodgers in the 1950 Rule V Draft.

Morrie enjoyed his finest season in the big leagues in 1951 when he went 11-4 and beat every team in the American League at least once.

"I beat the Yankees both in Philadephia and New York. I always had good luck against the Yankees and Indians." - Morrie Martin recalling the 1951 season

Morrie's career appeared headed uptown in 1952 when he was struck by a line drive off the bat of Mickey Vernon early in the season. The shot broke the index finger of his pitching hand and sidelined him for the remainder of the season after he had made five starts.

Martin was sent to the White Sox in the middle of the 1954 season. He was used mainly in relief the balance of his ten-year career, playing also with the Baltimore Orioles in 1956, the St. Louis Cardinals in 1957, the Cleveland Indians in 1958 and finishing up his 10-year major league run with the Chicago Cubs in 1959.

Morrie finished up his pro baseball career with the Houston Buffs of the American Association in 1960 at the age of 37. He had also spent ten active seasons in the minor leagues, where he won 85 contests while losing 58 with a 3.09 ERA.

Morrie spent most of his post-playing career in sales in the meat packing industry. He died at age 87 at his home in Washington, Missouri.