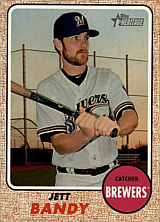 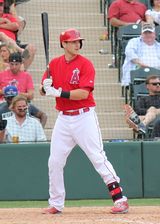 Catcher Jett Bandy made his major league debut with the Los Angeles Angels of Anaheim at the end of the 2015 season after having been a 41st round pick by the Angels in the 2008 amateur draft. He went 1 for 2 in only 2 appearances his first season, but the one hit was a homer off Glen Perkins of the Minnesota Twins on September 20. He hit .234 in 70 games as the team's main backup catcher in 2016.

Jett was traded to the Milwaukee Brewers in return for another back-up catcher, Martin Maldonado, as well as pitcher Drew Gagnon before the 2017 season and started the year red hot. In 15 games in April, he hit .327 with 4 homers and 8 RBI, then cooled down in May, when he hit .218, although with another 2 homers and 10 RBI. He then fell into a deep slump and was only 2 for 43 when, on June 25, he was sent to the Triple A Colorado Springs SkySox. The Brewers were concerned with his lack of hitting and had the opportunity to upgrade the position when former two-time All-Star Stephen Vogt was placed on waivers by the Oakland A's. Jett finished the season at .207 in 60 games, with 6 homers and 18 RBI, almost all of his production having come in the first month. His big league 2018 was abbreviated. In 24 games, he batted .188/.268/.266 with a homer and RBI. He was designated for assignment in May and became a minor league free agent on Halloween. He spent 2019 in Triple A with the Nashville Sounds, the new affiliate of the Texas Rangers.