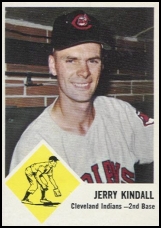 Jerry Kindall was signed by the Chicago Cubs as a bonus baby off the campus of the University of Minnesota, where he had been the star of the team that won the 1956 College World Series, and because of the bonus rule of the time, went straight to the major leagues, where he was required to stay for two full seasons. He played little the first year, getting only 55 at-bats in 1956, but saw more action in 1957, playing 72 games and getting 181 at-bats. He hit 6 homers, but hit only .160 and struck out 48 times while drawing only 8 walks. He had been a shortstop in college, and played there exclusively his first season, but was used more at second base the next year, which would be his most common position over the years.

The bonus rule was rescinded after the 1957 season, so Jerry got to go to the minor leagues to further his apprenticeship. He had a cup of coffee with the Cubs in 1958, then came back to stay in 1960, when he played 89 games, hitting .240. Once again, control of the strike zone was his nemesis, as he walked only five times in 246 at-bats, while striking out 52 times. In 1961, he hit .242 with 14 doubles and 9 homers, showing some of the power he had displayed in college. If Ernie Banks had kept him off the shortstop position until then, he was unable to unseat Don Zimmer from second base, and even if Banks was about to move to first base, the Cubs had another promising infielder about to make his debut in second baseman Ken Hubbs, so there was really no room for him.

He was traded to the Cleveland Indians before the 1962 season and had his best season that year, playing 154 games, during which he hit .232 with 21 doubles and 13 homers, scored 51 runs and drove in 55 as the Tribe's second sacker. He also drew a career-high 45 walks, against 107 K's. He was still a below average hitter, with an OPS+ of 75, but that turned out to be his peak. In 1963, he slipped to .205 in 86 games, struck out 71 times while walking only 18, and lost his starting job. He was part of a foursome that played between 41 and 46 games at shortstop for the Indians that season: Dick Howser was the starter early on but was injured, and Larry Brown, Tony Martinez and Jerry replaced him, all four playing almost the same number of games and innings. He was traded to his hometown Minnesota Twins early in 1964 but played sparingly and only hit .183 (and only .148 with Minnesota). However, he bounced back to claim the starting second base job for the Twins in 1965, playing 125 games in a pennant-winning season. He was slowed down by a calf injury, however, and minor league veteran Frank Quilici got to play in his stead, eventually claiming the job just before the start of the 1965 World Series. Kindall had hit only .196, and had been particularly bad against the ace of the Los Angeles Dodgers, Sandy Koufax, back when he was a National Leaguer, so Quilici got to play every inning of the Series at second base. Jerry was not used at all as the Twins were defeated in seven games, then was released at the end of spring training in 1966, ending his playing career.

He had completed is bachelors and masters degrees while in the Cubs organization and found a job as a coaching assistant at his alma mater after being let go by the Twins, starting a long career as a college coach. He was the head coach at the University of Arizona from 1973 to 1996, leading the Wildcats to three College World Series victories, in 1976, 1980, and 1986. He and Mike Gillespie are the only two men to both play for and coach an NCAA-championship baseball team.

In 2009 Kindall was announcing Big 10 baseball games on the Big 10 Network.