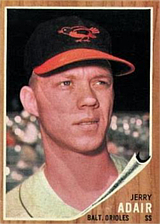 "That man was one of the coolest clutch hitters I had seen." - Carl Yastrzemski

After attending Oklahoma State, where he also played basketball, Adair was signed by the Baltimore Orioles for a reported $40,000 bonus in 1958 and brought straight to the major leagues. By 1961 he was a regular, and the next year he hit .284 with 11 home runs. While his offensive numbers were generally much lower, he set records with his glove. In 1964, he fielded 458 consecutive chances over 89 games without an error at second. He led the AL with a .994 fielding percentage that year and a .986 mark in 1965. After a stint with the Chicago White Sox, Adair was traded to the Boston Red Sox in 1967 and helped the team to the World Series by hitting .291. He was later selected by the Kansas City Royals in the 1968 Expansion Draft and ended his big league career after a little more than a season there.

Once his big league days ended, Adair played a season in Japan with the Hankyu Braves and was a major league coach for the Oakland Athletics from 1972 to 1974 and the California Angels in 1975. Dick Williams, who had managed the 1967 Red Sox, was the A's manager when Adair joined the coaching staff in 1972 and again with the 1975 Angels. The A's won the World Series all three seasons he was a coach.