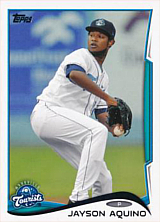 On December 9, 2015, he was claimed off waivers by the St. Louis Cardinals. He was traded to the Baltimore Orioles for cash on April 7, 2016. He began the year with the Bowie Baysox, but on July 4th, was promoted to the majors without ever playing at Triple A. He debuted that day, pitching two-thirds of an inning unscathed against the Los Angeles Dodgers, retiring both batters he faced: Chase Utley and Corey Seager. On July 7th, he was optioned back to the minors. He was an Eastern League Mid-Season All-Star in 2016. He finished 2016 with 3 big league appearances and tacked on 4 more for the O's in 2017, pitching to a total of a 6.32 ERA in 15 2/3 innings. He was released in June 2018 while pitching in the minors and bounced around the independent leagues since.