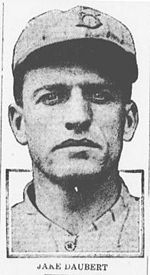 Jake Daubert was a good-hitting, smooth-fielding first baseman from the dead-ball era. He was an MVP once, and led the league in hitting twice. In addition, when two baseball organizations (SABR and STATS) decided to award "retroactive" Gold Gloves for decades prior to the time when the Gold Glove awards had started, Jake was given the Gold Glove for the 1910s in the National League. He is second on the all-time list for sacrifice hits.

Daubert spent his entire career with two teams. He was with the Brooklyn Dodgers from 1910 to 1918, and then with Cincinnati Reds from 1918 to 1924. In spite of his long major league career, he didn't break into the majors till he was 26 years old. He was a coal miner starting at age 11, and then a minor league pitcher.

Daubert was never a great doubles hitter, and except for his first season in the majors, when he was third in the league with homers with 8, he was never a big home run hitter either. However, he did hit a lot of triples, leading the league twice in his career, and finishing in the top 5 in the league several other times. The first time he led the league in triples was in his last season with Brooklyn, 1918. He was a basestealer of moderate proportions, typically stealing around 25 in his first few seasons, and then dropping down to 10-15 in his later seasons.

He was also a frequent factor in the batting championship, and led the league twice, in 1913 and 1914. In 1913, he was given the MVP Award - he was not in the top five in the league in Adjusted OPS, but his high batting average and good fielding carried the day.

In the 1916 World Series, which Brooklyn lost to the Boston Red Sox, he usually batted second in the batting order, ahead of Stengel and Wheat.

In 1917 and 1918, Wheat started to hit for a higher average than Daubert, who was by now in his mid-thirties. Daubert was traded to the Cincinnati Reds in February of 1919, and thus had the opportunity to play in the 1919 World Series tainted by the Black Sox Scandal. 1919 was not one of Daubert's more impressive years, but he still was a contributing player to the Reds. He hit .276, good for third on the team behind Edd Roush and Heinie Groh. His 12 triples tied for the team lead. In the 1919 Series, he batted 2nd in the lineup, behind Morrie Rath and ahead of Groh and Roush.

The most similar players to Daubert, using similarity scores, are three other slick-fielding first basemen from the dead-ball era who had long careers: Ed Konetchy, Hal Chase, and Fred Tenney. An obviously-similar player is Keith Hernandez, who also was a slick-fielding first baseman who won an MVP Award and a batting championship, and whose career numbers seem quite similar, but for some reason the similarity scores method doesn't put him in the top 10 most similar players, perhaps because Hernandez hit more doubles and homers, while Daubert was more proficient at getting triples.

Daubert tragically died at age 40 following appendicitis surgery. It was only 19 days after his last major league appearance.