Inducted into Hall of Fame in 1959

"One of the grandest guys ever to wear a baseball uniform, one of the greatest batting teachers I have seen, one of the truest pals a man ever had and one of the kindliest men God ever created." — Casey Stengel (this quote appears on Zack Wheat's Hall of Fame page)

Hall of Famer Zack Wheat played nineteen years in the majors, almost all with the Brooklyn Dodgers (who were usually called the Superbas or Robins while he was with them). A high average hitter, the most similar players according to the similarity scores method are Tony Gwynn and Roberto Clemente. No player has a similarity score higher than 882, and Gwynn and Clemente come from much different eras, so Wheat was a pretty unique player. 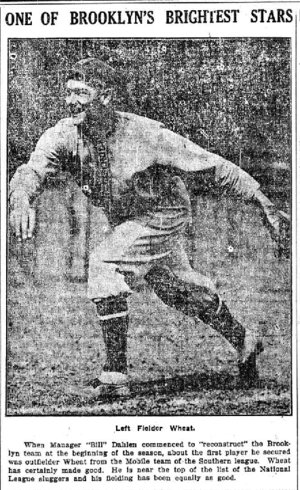 Wheat playing left field around the time of his call up from Mobile, 1909

Wheat played for Brooklyn from 1909 through 1926, and Brooklyn's teams in that period were usually pretty bad. He did appear in two World Series, in 1916 and 1920, although Brooklyn won neither Series and neither was a close contest.

Wheat had been a good dead-ball era player, but the lively ball era after 1920 was particularly good for him. He had some of his best years when he was 35+ years old, and that takes into account that everyone's performance looked better in the lively ball era.

Wheat's Adjusted OPS scores are not particularly high for a Hall of Famer, but on the other hand he was a well-rounded player. His Gray Ink score (which is the 27th highest of all time) shows that he was commonly in the top ten in the National League - in batting average, on-base percentage, and slugging percentage, among other stats, and he also stole over 200 bases in his career. As a defensive player, his range was good for many years until he began to age. He never played any position but outfield during his major league career, and almost never appeared in any outfield position other than left field, which he owned for many years in Brooklyn.

". . .Zach Wheat is the easiest, most graceful of outfielders with no close rivals . . . But he is much more than a brilliant outfielder. He is a substantial one on every important count. His throwing arm is exceptionally good. He is fleet of foot on the base paths, and he is one of the most dreaded and murderous sluggers . . ."

"What Lajoie was to infielders, Zach Wheat is to outfielders . . ."

Wheat retired with 2,884 hits compiled largely during the dead-ball era. In BBWAA Hall of Fame voting, he was on the ballot from 1937 to 1956, never getting more than 23% of the vote. The Veterans Committee voted him in after that, in 1959.

He was the brother of Mack Wheat, with whom he was a teammate for several years. Another brother, Buck Wheat, played in the minor leagues.