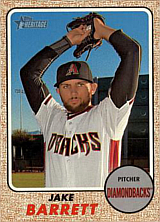 Pitcher Jake Barrett began playing in the Arizona Diamondbacks minor league system in 2012 and made his major league debut on Opening Day in 2016.

He was originally drafted by the Toronto Blue Jays in the third round of the 2009 amateur draft, one pick after pitcher Joe Kelly and in the same round as third baseman Kyle Seager - but opted not to sign. He did sign after being taken in the 3rd round of the 2012 amateur draft by Arizona. Scouted by Matt Smith, his signing bonus was $392,900. With the South Bend Silver Hawks in 2012, Barrett was 0-3 with a 5.84 ERA in 25 relief appearances. Entering 2013, MLB.com ranked him the 16th-best prospect in the Diamondbacks system. He went 3-2 with 29 saves and a 1.21 mark in 52 games between the Visalia Rawhide and Mobile BayBears (with whom he had a 0.36 ERA in 24 games) that year and was named a California League Midseason All-Star. Following the campaign, he was named an AFL Rising Star and in 2014, he was named a Southern League Mid-Season All-Star.

Barrett made his big league debut at the beginning of 2016, pitching 68 games to the tune of a 3.49 ERA, 1.26 WHIP, 28/56 BB/K ratio and 4 saves. Over the next two seasons, he made but 35 appearances to diminishing returns, with an ERA north of 5. January 2019 began the nomadic stage of Barrett's big league career: he was designated for assignment to make room for Greg Holland, dealt to the San Francisco Giants and waived within 3 weeks, claimed by the Pittsburgh Pirates at the start of March and placed on the 40 man roster only to be waived at the end of spring training and claimed by the New York Yankees. Following 2 disastrous appearances with the Bronx Bombers, he was outrighted off their 40 man roster at season's end and became a free agent.