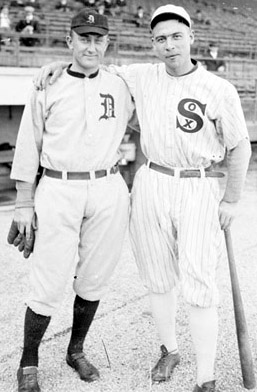 First baseman Jack Fournier spent 15 years in the majors and was regarded as an excellent hitter but sub-par defensively.

He was born in Michigan, in a logging village near the shore of Lake Huron, but grew up in the Pacific Northwest. His father was a French Canadian logger who moved to where there was work cutting down trees, taking his family along. After playing high school football and baseball in Tacoma, Washington, Fournier was purchased from the Boston Red Sox by the Chicago White Sox prior to the 1912 season. He saw limited action in his first two years with the club but became a regular at first in 1914, hitting .311. The next year, splitting time between first base and the outfield, he hit .322 and led the American League with a .491 slugging percentage. However, his average dropped to .240 the next year, and with the acquisition of first baseman Chick Gandil in 1917, there was no longer a place on the Sox for Fournier.

Fournier spent most of the next three years with the Los Angeles Angels of the Pacific Coast League but did hit .350 in 27 games with the 1918 New York Yankees. He joined the St. Louis Cardinals in 1920 and hit .343 with them in 1921 (teammate Rogers Hornsby hit .397 that year). In 1923, he was traded to the Brooklyn Robins and hit over .300 in each of the next three seasons. In 1923, he was third in the National League with a .351 average; the next summer, he led the NL with 27 home runs; and the following year, he led the circuit with 86 walks. His Adjusted OPS+ was in the top three in the league each year.

Although Fournier played 15 seasons in the majors, his numbers are a bit short for Hall of Fame consideration. He had around 1,600 hits, and neither scored nor drove in 1,000 runs. However, his 142 lifetime Adjusted OPS+ is # 63 on the all-time list, higher than Duke Snider or Reggie Jackson and his career batting average was a very good .313. Bill James ranks him the 35th best first baseman of all time. There is one Hall of Famer on the similarity scores list of the ten most similar players, that one being George Kelly. A more recent player, Pedro Guerrero, is also on the list of the most similar players.

Fournier was considered a terrible defensive player, appearing most of his career at first base, which was an important defensive position in those days. He led National League first basemen in errors twice during his career.