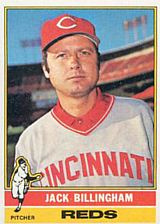 “A manager may not be supposed to have favorite people but Jack Billingham was one of my favorites. He is a tremendous guy and a super person.” - Sparky Anderson

Jack Billingham had a major league record of 145-113 and was a key member of the Big Red Machine's pitching staff. He was especially good in World Series play, posting a record of 2-0 with an ERA of 0.36.

Billingham came up originally with the Los Angeles Dodgers in 1968, and was two years older than teammate Don Sutton. He had an excellent rookie year, going 3-0 with 8 saves and a 2.17 ERA, but the Dodgers let him be drafted away by the expansion Montreal Expos after the season. Montreal promptly traded him as part of the Rusty Staub deal to the Houston Astros just before the 1969 season started. After three years with the Astros, Billingham was traded again in another big deal, this time in the deal that brought Joe Morgan to the Reds, with Billingham and others, and brought Lee May and others to the Astros. Jack spent six years with the Reds, the heart of his career, winning 19 games in both 1973 and 1974. On April 4, 1974, he gave up Hank Aaron's 714th career home run. He was a starter for the Reds teams that won the 1975 World Series and 1976 World Series, and also played on the losing side in the 1972 World Series. He had a sparkling ERA of 0.36 with a 2-0 record in 7 pitching appearances over the three Series. Afterwards, he went to the Detroit Tigers where he had two decent seasons in 1978 and 1979 at ages 35 and 36. He wrapped his big league tenure with 15 appearances split between the Tigers and Boston Red Sox in 1980.

In 1984, Billingham was inducted into the Cincinnati Reds Hall of Fame. In 1989, he played for the Orlando Juice of the Senior Professional Baseball Association, going 0-1 in 6 games. The similarity scores method says the most similar pitcher (as of 2020) is Johnny Podres.

Jack is a distant cousin of Christy Mathewson, Henry Mathewson and Nicholas Mathewson.