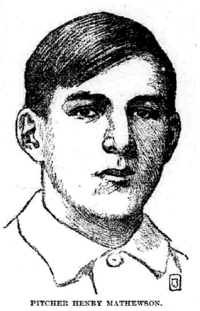 "Henry Mathewson, Christy's brother, is fast coming to the front as a pitcher." - Sporting Life, April 14, 1906

Mathewson had followed his brother to Bucknell University, where he attended in 1905-1906. He appeared in the majors with the New York Giants in 1906 and 1907 at the ages of 19 and 20 years old. He was the youngest player in the National League in 1907. Even though his brother was a big star, Henry didn't get much of a chance, pitching only 11 innings wherein he allowed 14 walks. He was sent to Wilmington in May 1907.

He also played for Savannah and Columbus.

In 1915 and 1916 he managed Newnan in the Georgia-Alabama League. In 1915 he finished first while in 1916 he finished second behind Rome, which was managed by another brother of a Hall of Famer, Frank Manush.

Mathewson was tall and slim, at 6' 3" and 175 lbs. He died young, at the age of 30, after contracting tuberculosis in his late twenties. Henry moved to Arizona with his wife and four daughters to ease the symptoms. The family returned to Factoryville in June 1917 to allow Henry to die at home. He passed away there shortly thereafter. [1]

Sporting Life featured his likeness and biography on April 28, 1906. He had played semi-pro ball for a couple of years prior to that, and the article stated that John McGraw planned to use the season mainly as a learning experience for Henry, with lots of time on the bench. His brother Matty stated:

"He now has as much speed as I had when I broke into the game and he has control and a splendid assortment of curves. All he wants is experience . . ."