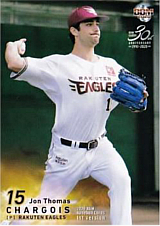 Pitcher J.T. Chargois was taken by the Minnesota Twins in the second round of the 2012 amateur draft, one pick after infielder Matt Reynolds; the scout was Greg Runser. After posting a 1.69 ERA with 22 strikeouts in 16 innings pitched for the Elizabethton Twins in 2012, he did not pitch in 2013 and 2014 due to Tommy John surgery. He had been named the 11th best prospect in the Twins system by MLB.com going into 2013. He returned in 2015, going 2-1 with 15 saves and a 2.62 ERA in 48 games between the Fort Myers Miracle and Chattanooga Lookouts, averaging more than a strikeout per inning, and was a Florida State League Mid-Season All-Star. He began 2016 with Chattanooga, but was promoted to the Triple A Rochester Red Wings after posting a 1.54 ERA in 11 games. He had a 0.73 ERA in 11 games for Rochester, striking out 20 batters in 12 1/3 innings, earning a promotion to the major leagues.

In his first game, on June 11, 2016 against the Boston Red Sox, he pitched 2/3 of an inning, allowing three hits and two walks while hitting a batter (Jackie Bradley, Jr.) and throwing a wild pitch. He allowed five earned runs before being relieved by Brandon Kintzler. He was demoted to the minors shortly after his appearance, but made 25 appearances in all with the Twinkies with a 4.70 ERA. In 2018, he was picked up by the Los Angeles Dodgers off waivers from the Twins and pitched well for the National League pennant-winners, with a 3.34 ERA in 39 games. He struggled in 2019, with an ERA of 6.33 in 21 games, and spent most of the year in the minors. On December 28th, he obtained his release from the Dodgers in order to go pitch in Japan.

Chargois spent 2020 with the Tohoku Rakuten Golden Eagles in the Pacific League, also making some appearances with their ni-gun squad. At the highest level, he was 0-3, 5.81 in 31 games with 1 save. Not having impressed anyone, he decided to return to the U.S. and on February 9, 2021 he signed a free agent deal with the Seattle Mariners. He got his career back on track by going 1-0, 3.00 in 31 games and on July 29th, in one of a series of puzzling trades made by the Mariners around the trading deadline - puzzling because they were surprisingly in contention for a wild card slot but the trades fit no obviously discernible pattern - he was sent to the Tampa Bay Rays with 3B Austin Shenton in return for Diego Castillo, who immediately stepped into the role of Seattle's closer. For Chargois, he became part of the Rays' amorphous but very efficient bullpen crew.