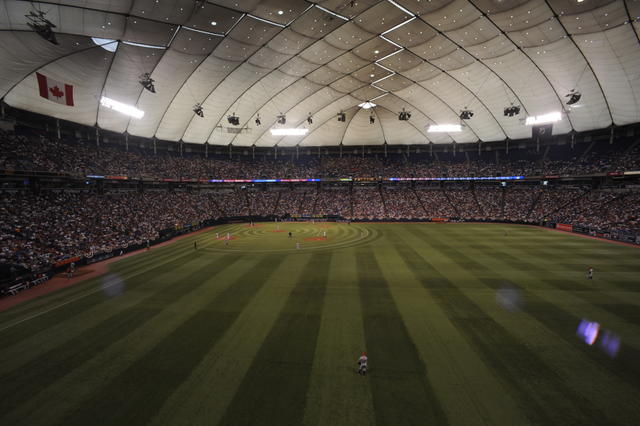 Inside view of the Metrodome

The first event held in the Metrodome was an exhibition game between the Philadelphia Phillies and the Minnesota Twins on April 3, 1982. Pete Rose made the first hit. Three days later, the Twins lost to the Seattle Mariners, 11-7, on opening day, in a foreshadowing of how hitter-friendly the new ballpark would prove to be. The temperature outside on April 3rd was 19 degrees, with winds gusting up to 45 miles per hour, giving immediate support for the concept of an indoor stadium in the Twin Cities area. The Minnesota Vikings of the National Football League had first insisted on such a stadium, as Metropolitan Stadium had a very poor configuration for professional football; the Twins then negotiated a 20-year lease with an escape clause based on attendance. In 1984, Twins owner Calvin Griffith was threatening to use this escape clause to move the Twins to the Tampa Bay area or elsewhere, and local businesspersons started a drive to buy rafts of the cheapest seats in the Dome in order to artificially boost attendance. Griffith decided instead to sell the team to local businessman Carl Pohlad. Attendance had been poor in the stadium's first two seasons because the Twins had been completely stripped of their veteran players, and lost 102 games the first year and 92 the second while fielding a very young squad.

The Metrodome proved to be very quirky in its configuration for baseball. The white roof made it easy for outfielders to lose balls, while the artificial turf was very spongy and induced strange high bounces of a type that had not often been seen on a baseball field heretofore. On May 4, 1984, Dave Kingman hit a towering fly ball here that never came down, going through a vent hole in the roof; he had to settle for a ground-rule double. On June 24th that same year, Harold Baines charged a ball that was rolling towards him in the outfield; it hit a seam and bounced over his head, rolling to the fence, giving Tim Teufel a game-winning, three-run, inside-the-park home run. It was sometimes fun, but it wasn't really baseball. On April 13, 1983, a different kind of problem occurred when a heavy snowstorm caused a tear in the fabric of the roof, making the roof deflate completely. On April 26, 1986, another storm, rain this time, tore a hole through the roof, with fans attending the game in the upper deck in right field being soaked as a consequence.

Another characteristic of the Metrodome was that it was loud. The Twins used that to their advantage in their run to winning the 1987 World Series; they were a poor team on the road, but almost unbeatable at home, and won every single home game played during the postseason, with fans making an ear-shattering racket and waving white "homer hankies" to make the place hell for visiting teams.

By the early 2000s, however, domed stadiums and artificial turf had fallen out of favor and the Twins were looking to move again. The state of the Metrodome was one of the reasons for the Twins to have been one of the two teams targeted for contraction after the 2001 season, along with the Montréal Expos, who had similar ballpark problems. But the long-term lease was still in effect, which allowed local authorities to sue Major League Baseball to force the team to continue playing. Rather than risk a dangerous legal battle, MLB relented and the Twins continued to play, but the writing was on the wall for the Met. Its last season came in 2009. The final home game was supposed to be played in September, but the Twins went on a hot streak at the end of the year, forcing a one-game playoff with the Detroit Tigers, which was played at the Metrodome on October 6th; the Twins won an fabulous 12-inning game, 6-5, to reach the postseason, Thus, the final baseball game at the Metrodome was Game 3 of the ALDS, which the Twins lost 4-1 to the New York Yankees on October 11th. They moved to outdoor Target Field in 2010. However, the Minnesota Vikings continued to use the Metrodome until the end of the 2013 NFL season.

As a football stadium, the Metrodome was the venue for Super Bowl XXVI, on January 26, 1992.