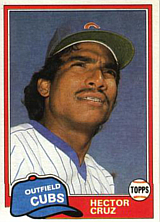 Héctor Cruz is the brother of Jose Cruz and Tommy Cruz and the uncle of Jose Cruz Jr., Jose E. Cruz, Alberto Cruz and Cirilo Cruz. The brothers were teammates on the St. Louis Cardinals briefly late in 1973. They and the three Alou brothers 10 years earlier (Felipe, Matty and Jesus) are the only trios of brothers to play together on the same team in the 20th century.

Cruz showed flashes of power early in his career with the Cards. He had a great season in Triple A in 1975, hitting .306 with 29 homers and 116 RBI for the Tulsa Oilers of the American Association. This performance earned him The Sporting News Minor Leaguer Player of the Year honors and a 23 game look back in the bigs. After the season, the Cards traded incumbent Ken Reitz to give the starting third base job to Héctor. He was the regular in 1976, hitting .228 with 17 doubles, 13 homers and 71 RBI in 151 games. After the season, St. Louis re-acquired Reitz and put him back at third, while Cruz played mostly outfield the rest of his career. In 1977, he hit .236 with 19 doubles and 6 homers in 118 games mostly in right field.

Acquired by the Chicago Cubs in 1978, his bat was a disappointment and he was dealt to the San Francisco Giants at the June 15 trading deadline. In 1979, he was traded at midseason to the Cincinnati Reds for reliever Pedro Borbon and played there for a year and a half as a backup outfielder. Cruz had a second go-around with the Cubs in 1981-1982 but again failed to produce. The outfielder-third baseman hit just .255 with 39 home runs in his nine major league seasons. Cruz played one season for the Yomiuri Giants following his departure from the majors but hit just .240 with 4 home runs. In 1990, he played in 15 games in the Senior Professional Baseball Association for the Florida Tropics.

Héctor played for the Ponce Lions, Mayagüez Indians and Caguas Creoles of the Puerto Rican Winter Baseball League. In 2007, he was inducted into the Caribbean Baseball Hall of Fame.