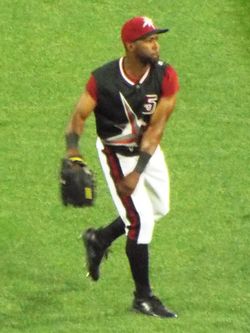 He was Cuba's starting center fielder in the 2013 World Baseball Classic.

He defected from Cuba in 2015 and established residency in Mexico in order to be declared a free agent by Major League Baseball. On March 1, 2016, he signed a one-year contract with the Seattle Mariners. Given he had missed an entire season of baseball, the contract was deliberately short in order to allow him to establish his true level as a player and then possibly be in line for more money. He was slated to begin his pro career in the minor leagues, however, given his lack of top-level competition in the past couple of years. He was first assigned to the Jackson Generals of the Southern League, where he hit .293 in 58 games, then on June 24th was promoted to the Tacoma Rainiers of the Pacific Coast League. There, he hit .340 in 26 games and a month later, on July 29th, he was making his major league debut against the Chicago Cubs, taking over for Nelson Cruz in right field in the bottom of the 7th after a rain delay. In his first at-bat, he struck out against Mike Montgomery. In his first season, he hit .250 in 45 games with 1 homer and 12 RBIs.

In 2017 and 2018, Heredia was the Mariners' regular centerfielder, playing 123 and 125 games respectively. He hit .249 the first year and .236 the second, although his OBP was actually a tad higher the second (.318 as opposed to .315). He did not have much power, though, with a total of 30 doubles and 11 hoemrs over the two seasons, and scored 43 and 29 runs. The Mariners were clearly looking for more production from that spot in the line-up (they had toyed with moving 2B Dee Gordon to CF in 2018, before a PED suspension to Robinson Cano changed their plans), and on November 8, 2018, they sent Heredia and C Mike Zunino to the Tampa Bay Rays in return for OFs Jake Fraley and Mallex Smith, who was penciled in to be the M's new centerfielder.