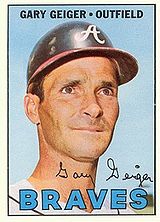 Before the 1954 season Gary Geiger was signed by the St. Louis Cardinals as an amateur free agent. Gary originally signed on as a pitcher and his first two years in the minors was spent with the class D Hannibal Cardinals going 7-7 with a 5.05 ERA in 1954 and 20-7 with a 1.98 ERA in 1955. His 20 wins tied him for the league lead and he had 177 strikeouts that led the league. He also was chosen for the All-Star team. In 1956 Gary was with the Rochester Red Wings of the International League, won 3 and lost 2 with a 3.78 ERA.

The 1957 season found Gary switching to the outfield for the AAA Omaha Cardinals and the Rochester Red Wings, where he hit .245 in the split season. On December 2nd of that year, he was drafted by the Cleveland Indians from the Cardinals in the 1957 Rule V Draft (the first of three times he was taken the Rule V Draft). Gary hit .231 in 91 games for the Indians in 1958 and on December 2nd the Indians traded him along with Vic Wertz to the Boston Red Sox for Jim Piersall.

Playing in center field between Ted Williams and Jackie Jensen in the Red Sox outfield in 1960, Geiger was hitting .302 midway through the season when he was sidelined for the rest of the year with a collapsed lung. Gary bounced back to hit between 16 and 18 homers a season between 1961 and 1963, and hitting in the mid .250's. He never again came close to the .300 mark.

Geiger again missed a lot of playing time due to illness in 1964 and 1965 before spending a few more years as a spare outfielder and pinch hitter with the Atlanta Braves and Houston Astros. Gary closed out his major league career with Houston in 1970. He ended his career with 77 home runs and a .246 batting average.

Gary had 18 active playing seasons in pro ball, twelve in the majors and the balance in the minors, where he managed 48 homers with a minor league career .261 batting average. In his three years on the mound he had 30 wins with 16 losses and a 3.60 ERA. He also made one pitching appearance in the majors, in his rookie season in 1958.

Geiger also managed for three years. In 1971 with the Tulsa Oilers of the American Association, in 1972 for the Cedar Rapids Cardinals of the Midwest League and finishing up his managerial career in 1974 with the Greenwood Braves of the Western Carolinas League.