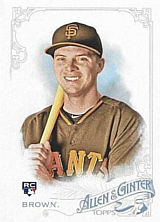 Gary Brown was a first-round draft choice in the 2010 amateur draft. He appeared in 8 games with the San Francisco Giants in 2014.

Brown hit .333 as a high school sophomore, .480 as a junior and .612 as a senior. His senior season, he was named second-team All-American by Baseball America, joining Kentrail Davis and Garret Nash; first-teamers were Wendell Fairley, Jason Heyward and Ben Revere. Due to a strong college commitment, he fell to the 12th round of the 2007 amateur draft, when the Oakland A's picked him. Gary did not slow down upon hitting the college scene, batting .292/.374/.426 as a freshman and setting a Cal State Fullerton freshman record with 25 steals in 28 tries. He was named second-team Freshman All-American by Baseball America joining Michael Choice behind Kentral Davis and two others. Brown batted .340/.402/.494 with 64 runs scored in 63 games as a sophomore. Playing mostly third base, he stole 23 bases, third in the Big West. He also was third in the Conference in runs scored and hit a Big West best 7 triples, 10th in NCAA Division I. In 2010, the Upland native was Big West Player of the Year. He was hitting .438/.485/.695 with 32 steals in 37 tries and 63 runs scored in 49 games when the 2010 amateur draft rolled around. Gary went 24th overall, taken by the San Francisco Giants. He was the second Fullerton player taken, as teammate Christian Colon went fourth overall. In 12 games that year for the Salem-Keizer Volcanoes and AZL Giants, Brown hit only .159/.296/.227.

His major league career was brief, though successful. In seven at-bats with the Giants in 2014, he had three hits for a .429 average. He received one at bat in the 2014 NLDS, striking out against Tanner Roark in the 18th inning of Game 2 against the Washington Nationals. He was designated for assignment the following spring, bounced around and retired in July 2017.