Freddy Parent was the first shortstop in the history of the Boston Red Sox franchise and took part in the first 413 games the team ever played, from April 26, 1901 until September 25, 1903. He was also the starting shortstop when the team won the first World Series ever played in 1903, scoring 8 runs, a Series record that would stand until Babe Ruth broke it in 1928.

Parent was born in Biddeford, ME in a French-Canadian immigrant family. He left school at 14 to work in a harness shop, and then in a textile mill in Sanford, ME at age 16. During that time, he played amateur baseball as well, and, in spite of his small size (he stood somewhere between 5' 5" and 5' 7"), he earned a chance to play in the minor leagues. In 1898, he made his professional debut with New Haven of the Connecticut League, hitting .326, then followed up with a .349 average in 1899 as New Haven won the league title. In July of that year, he was called up by the St. Louis Perfectos of the National League, who were playing in New York and were short a player. He went 1 for 8 during his two-game trial, but it came to an end as he sprained an ankle. He played one more year in the minors, batting .287 with 23 stolen bases and 94 runs for the Eastern League champions Providence Clamdiggers in 1900, before signing with the newly-formed Boston Americans of the American League in March, 1901. 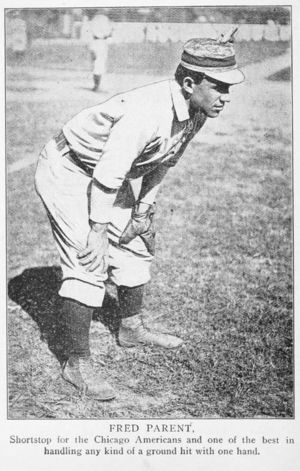 Freddy Parent was an instant hit in Boston, as a solid fielder and dependable batter, who could slap the ball to all fields and was an outstanding bunter, but who also collected his share of extra base hits. He was also an excellent baserunner, and during his first few seasons, an ironman who never missed a game. This would change later in his career, after a few beanings sustained because of his tendency to crowd the plate began to cut into his playing time.

Parent's hitting would decline after this early peak. He hit .234 and .235 the following two seasons, as Boston fell out of contention, and then reached the AL cellar in 1906. He bounced back to hit .276 in 1907. That year, he wore a prototype batting helmet for a good part of the season, after having been hit on the head by a pitch. This innovation was not well-received by opposing players, who riled Parent for lacking courage, and he discarded the contraption the following spring. After the season, he was traded to the Chicago White Sox, in part because the team's owners were miffed that Parent had held out for a pay raise at the beginning of the season.

The end of the road[edit]

Freddy Parent was no longer a star player when he joined his new team. His batting averages from 1908 to 1910 were .207, .261 and an ungodly .178 the last year. Perhaps not realizing that his lack of hitting had put him in a precarious position, Parent held out again in the spring of 1911, and was sold to the minor league Baltimore Orioles after three games.

Parent remained with the Orioles as a player/coach for a few years. In his first year with the team, he backed up Fritz Maisel at short, Mickey Corcoran at third and all the outfielders, playing in a total of 121 games. He hit .265/~.341/.343 and stole 21 bases. He walked twice as often as he struck out (52:26). Parent was Baltimore's regular second baseman in 1912, hitting .306/~.354/.396 with 23 steals and 13 triples. He was second among International League second basemen in average, behind another ex-Red Sox player, Amby McConnell.

At age 37, he edged Neal Ball as Baltimore's main second baseman, hitting .268/~.354/.309 with 15 steals in 79 games. In 1914, he served as a mentor to young left-handed pitcher Babe Ruth, who was making his professional debut. The Orioles were in financial straits by that point, facing competition from the Baltimore Terrapins of the new Federal League, and Parent advised Boston manager Bill Carrigan to buy the young pitcher, even if he was still raw. Parent remained a starter at his old age, playing 108 games, including a team-high 90 at shortstop. He hit .280/~.363/.348.

He then served as player-manager of the Springfield Ponies of the Eastern League in 1918 and of the Lewiston Red Sox of the New England League in 1919.

No longer able to play, Freddy Parent then turned to coaching in the college ranks, first with Colby College from 1921 to 1924, then as an assistant coach at Harvard University under head coach Fred Mitchell - a former teammate - from 1926 to 1928. In 1927 he also managed the Lawrence Merry Macks in the New England League. He returned to Maine afterwards, running a few small businesses, and lived to the age of 96. In his last years, he gained some fame as the last survivor of the original World Series and granted a number of interviews on the subject. Not surprisingly, as old ballplayers are wont to do, he decried that the level of major league play had declined significantly since his heyday. He was named to the Maine Baseball Hall of Fame in 1969 and died in Sanford in 1972.