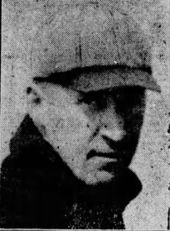 Mickey Corcoran had a long minor league career, coming to the majors only briefly with the 1910 Cincinnati Reds.

Mickey, who was born and died in Buffalo, played parts of four seasons with the minor league team in Buffalo, parts of four seasons in Montreal, three seasons in Baltimore (1911-1913) and parts of three seasons in Scranton, among other places. He also managed two seasons in the minors. While with the Reds, he played 14 games, exclusively at second base. The regular at that position was Dick Egan, who held the job with the Reds during 1909-1913, although he was not much of a hitter. Corcoran made his debut while the Reds were on the road and did not hit much. By the time the team came home from a lengthy road trip, Sporting Life's correspondent was already writing that Corcoran was not good enough with the bat. In 46 at bats, Mickey finished batting .217/.308/.283 with three doubles and seven RBI.