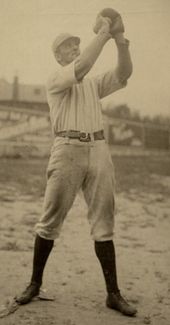 Fred Odwell was past the age of thirty when he came to the majors as a regular for the Cincinnati Reds in 1904. It was an old team, however, with five of the eight regular position players at least 31 years old. He was a regular for three of his four years in the majors.

He is remembered for leading the National League in homers in 1905, and then never hitting another major league home run. Dave Brain would do the same a couple of years later. Odwell, by hitting a home run in his last at-bat in 1905, deprived his teammate Cy Seymour of a Triple Crown.

Odwell lost his regular job to Frank Jude in 1906, but Sporting Life, at least, was rooting for him, calling him a "hustler", "earnest", and "fleet-footed". Odwell got the job back in 1907.

In 1903 he played for the minor league Louisville Colonels, leading the league in triples. In the minors he also played for Toledo and Columbus.

The Catskill Mountain News of November 12, 1937, described the efforts of a Fred Odwell of Downsville, NY, in trying to establish the Shinhopple Game Refuge.

"Fred Odwell . . . has a vast following who believe that under Hanlon he will loom up the same brilliant he was when he outfooted and outbatted Dan Kerwin and won his Red spurs in the face of the prophecy that he was the one who would be ticketed back to the land of the Bourbons. . . while he often expressed a desire to escape from Redland last season it was merely because he thought he might have better luck elsewhere." - Sporting Life's Cincinnati correspondent, March 24, 1906

"FRED ODWELL'S FAREWELL. Fred Odwell's departure will be regretted by more than one enthusiast and no matter where he goes the good wishes of all who admire pluck and faithfulness will follow him. In official family it was believed that Odwell was not quite strong enough to 'fill in' as a regular and the policy is to get a youngster who will improve immeasurably for the role of extra man." - Sporting Life, December 28, 1907, lamenting the end of Odwell's tenure with the Reds, before the start of four seasons he would spend with Columbus

Odwell Gives Up Ball Playing: F. W. Odwell, the well known professional ball player of Downsville, who last year played with a team in Ohio, has declined all offers received from professional teams for the season of 1913 and will, it Is stated, remain at home and devote his attention to his business.

Hot Baseball 'Next Summer! Ed Reulbach who led National League pitchers in 1905, 1906 and 1907 during which the Chicago Cubs won pennants, and when the infield, Tinker to Evers to Chance, made the fans talk from East to West, is working for the Walsh-Perini company on the dam job at Downsville. More than that, Louis Perini of B. Perini & Sons, Inc., a dam contractor, is the owner of the Boston Braves of the National League, which team is expected by Boston fans to finish not lower than 1, 2, 3 in the race this year. Mr. Perini is a baseball enthusiast himself. But further still, and equally important, Downsville comes close to being the best baseball town in the county, and it has been so for 50 years. This fact stems from Fred Odwell and his brother, George. Fred was an infielder with the Cincinnati Reds when Christy Mathewson was pitching for the New York Giants. George played professional ball with Albany. The two Odwells have kept Downsville on the baseball map for half a century. So it will pay baseball fans in Delaware, Otsego and Sullivan' towns to keep an eye on Downsville. They'll see a smart team in operation. Fred Odwell pitched for Wilkes-Barre before he got into faster company Within two years Downsville will have perhaps 200 new skilled and unskilled men on the dam and on the 35 miles of new highway both sides of the village between Downsville and Margaretville. A good local baseball team doubtless would be well supported.