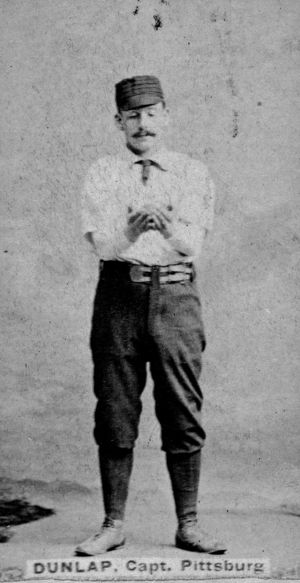 Nicknamed "Sure Shot" because of his powerful arm, Fred Dunlap twice hit over .300 for the Cleveland Blues in the early 1880s. He was lured to the St. Louis Maroons of the Union Association in 1884, becoming the highest-paid player in baseball at the time. He led the league with a .412 average, 160 runs, and 13 homers, as the Maroons won the league's first (and only) pennant.

After the Union Association folded, Dunlap returned to the National League but never again put up big numbers. However, he continued to be an above-average offensive player for several more years, and ended his major league career with an OPS+ of 134. Even looking at just the National League seasons, he had a career OPS+ of 120.

He had actually made his debut not as a player, but as an umpire for one NL game in 1879.

His death in 1902 at age 43 was attributed to "Tubercular Distended Rectum."

His obituary in Sporting Life (Dec. 13, 1902 issue) said he and Fred Pfeffer were the star second basemen of the profession during his time. He came from the "downtown lots" of Philadelphia into pro ball. After baseball, he chose "to follow the racing game", and Sporting Life said that caused him to lose the fortune he had accumulated in baseball. His last couple of years were spent in poverty.