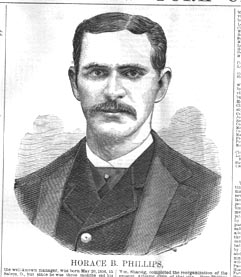 Horace Phillips was a manager in the major leagues for eight years. His first effort was with the Troy Trojans in 1879, where he managed part of the season. It was Dan Brouthers' rookie year.

In 1883, he managed the Columbus Buckeyes of the American Association. He had umpired one game in the circuit in 1882.

Phillips continued to manage the Alleghenys in 1887 as they began play in the National League. Key players such as Pud Galvin continued on the team. Phillips also managed them in 1888 and part of 1889. He was 36 years old at the time.

See also the reference to Phillips in SABR Biography of Pop Smith.

Phillips was apparently involved with one of the "Hop Bitters" teams financed by Hop Bitters medicine king Asa Soule. One reference says that in 1880 "the manager spent $400 on a drunken spree" (it is not specified if Phillips was the manager), and another says that in April 1881 "Horace Phillips loses his litigation against Hop Bitter owner A. S. Soule stemming from last year's disappearance with club funds and is ordered to repay $1,463". Asa Soule and the Hop Bitters Co. and April 1881 in baseball history.

In spite of the fact that Phillips was quite a famous figure in his day, as the above shows, the rest of his life was long shrouded in mystery, including details about his death. It was known however that he had become insane after his managerial career and that he had been confined somewhere in the Philadelphia, PA area. Researcher Peter Morris located him in 2010 under the name Henace B. Phillips in Pennsylvania death records; he had indeed passed away in 1896 at the Philadelphia Hospital for the Insane. The unusual first name stems from someone's inability to decipher Horace from the scribble on the original death certificate. He is buried at Mount Vernon Cemetery in Philadelphia.