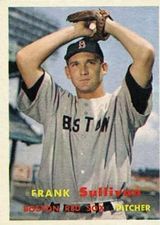 Right-hander Frank Sullivan was signed as an amateur free agent by the Boston Red Sox before the 1948 season. The 18-year-old spent his initial season with two different teams, the Oroville Red Sox of the class D Far West League and the San Jose Red Sox of the class C California League. He had a combined 1-4 record, pitching in only 8 games and 27 innings. Frank pitched for three different teams in 1949 and 1950, improved a bit, and then spent the next two years (1951 and 1952) in military service during the Korean War.

Frank returned in time to pitch for the Albany Senators of the class A Eastern League in 1953. He went 9-6 with a 1.78 ERA and also made his first appearance in the major leagues, going 1-1 in 14 appearances for Boston. He would never return to the minors after that. At 6' 6½", the righthander was one of the tallest pitchers of the time. His batterymate for most of his career was 6' 3" Sammy White. He also threw to 6' 4" catcher Haywood Sullivan.

Frank was the losing pitcher in the 1955 All-Star Game when he gave up Stan Musial's 12th-inning home run. Overall, he pitched creditably after entering in the 8th inning with the score tied, 5-5, and holding the National League scoreless for three plus innings. At the time, the only player in the majors taller than Sullivan was 6' 8" Gene Conley, the game's winning pitcher. Strange but true, after the 1960 season Sullivan was traded to the Philadelphia Phillies for Conley.

Following his playing days, the lanky Irishman joined his one-time roommate and batterymate Sammy White in Hawaii as a golf pro in Lihue, HI, on the Island of Kauai. Sounds like a tall tale!

Sullivan wrote the book Life Is More Than 9 Innings: Memories of a Boston Red Sox Pitcher, which was published in 2008.