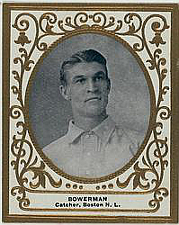 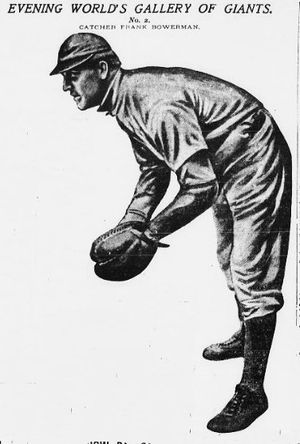 "'Frank Bowerman is the gamest guy who ever put on a uniform,' remarked George Gibson, former catcher and manager of Pittsburgh. Bowerman was once hit on the temple and knocked out and taken to the hospital. Everyone thought he was dead. Somehow, he turned up the next day ready to play. Before another game, machinery fell on his chest with a crushing effect. Yet after a few moments, Bowerman recovered enough to get to the ball park and catch another game." - The Sporting News, obituary for Frank, December 8, 1948

Frank Bowerman had a long playing career in the majors, mostly as a catcher. He was first John McGraw's teammate and was later managed by him for many years. Bowerman, who often caught Christy Mathewson, claimed to have discovered him at a time when Mathewson was with the Cincinnati Reds and not impressing. Bowerman said that he happened to play catch with him before a game, and recommended him to the Giants. The story has been questioned, however. Bowerman did catch one of Mathewson's no-hitters.

In 1893, he played on an amateur team that won a so-called world championship. He was player-manager of the Boston Doves in 1909.