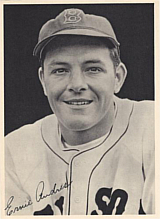 He signed with the Boston Red Sox in June 1939 after graduation and played for the Louisville Colonels in the Class AA American Association from 1939 to 1941. Louisville was right across the Ohio River from his hometown of Jeffersonville. Right after Pearl Harbor, he was recruited into the Navy Physical Training program as a CPO specialist and stationed at Great Lakes where he played on their baseball team. In 1943, he received a commission and was on a sub chaser in the Aleutians. After that, he was stationed at the Miami Naval Training Center and then in the Shoemaker, CA Naval Receiving Barracks and played baseball in both places. He was released from the Navy as a Lieutenant (jg) in December 1945 after 4 years of service and rejoined the Red Sox the following spring.

He made his major league debut on May 16, 1946 and appeared in 15 games for the Red Sox. Then, he was sent to the Minneapolis Millers of the American Association. The following year, he was traded to the Cleveland Indians and sent to the Indianapolis Indians, where he played two seasons. During this same period, he played professional basketball for the Indianapolis Kautskys of the NBL, a predecessor to the NBA. At the end of the 1948 season, he retired as a player and became baseball coach at Indiana University from 1949 to 1973. He was also an assistant basketball coach at IU from 1949 to 1958.

Andres was inducted into the Indiana Baseball Hall of Fame in 1999.