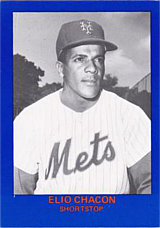 "Elio Chacón, who was with Buffalo, pulled something on me in spring training that showed you how completely naive I was. We worked out on this terrible diamond where high school teams played. I didn't know Elio Chacón. We came out together after practice one day, and we were getting ready to leave the park, and Elio was standing next to an old, open-top Jaguar. I said 'Hey, that's a nice looking car.' He said 'You want to take a ride in it?' I thought, Sure, this is neat. The keys were in it. I jumped in and off I went, running around Dunedin. I took a pretty good spin, and when I came back a kid was standing there saying 'Where the hell did you go in my car?' He said, 'I was calling the police. You stole my car.' And I proceeded to go explain the whole thing to him. Aw, man, don't trust the veterans! Elio completely hooked me. You need to learn that." - Ron Swoboda, to Peter Golenbock, Amazin': The Miraculous History of New York's Most Beloved Baseball Team

Elio Chacón is a key part of 1962 New York Mets lore. He played parts of three seasons in the bigs.

Chacón was the son of Cuban player Pelayo Chacón and brother of Pelayo Chacón Jr.. Elio played for the Venezuelan national team in the 1955 Pan American Games, hitting .323 and slugging .516 for the Bronze Medalists. He reached the major leagues in 1960, playing parts of the next two seasons with the Cincinnati Reds. He hit .250 (3-for-12) in the 1961 World Series, then was left unprotected in the expansion draft and gobbled up by the Mets.

Elio was the projected starting shortstop for the new club. He was solid, batting .236 with a fantastic .368 OBP (76 walks) in 118 games. But his ticket to immortality was punched with some misplays on the field. While manning shortstop, Elio and Hall of Fame center fielder Richie Ashburn found themselves frequently colliding in pursuit of fly balls. Ashburn, yelling "I got it! I got it!", soon discovered that Chacón spoke no English. To make up for the language barrier, Ashburn learned the Spanish equivalent, "¡Yo la tengo! ¡Yo la tengo!", and put it into practice. As Elio backed off from the first fly ball in a game, Ashburn settled in to grab it... only for Frank Thomas, the left fielder, to bowl him over, not comprehending Spanish.

The 1962 season proved to be Elio's final one in the bigs, but it had plenty of fireworks. On May 27th, in the first game of a doubleheader at Candlestick Park, Roger Craig was engaging in a beanball war with the San Francisco Giants, attempting to hit the great Willie Mays (who ultimately singled) before beaning Orlando Cepeda. During a series of pickoff attempts at second base, Elio slapped a hard tag on Willie diving back in and began punching him, only to be lifted off his feet and thrown to the ground by the future Hall of Famer, effectively pummeled. Only Elio was tossed; improbably, he was allowed to play the second game, both of which, naturally, were Met losses.

Chacón continued to play professionally until 1971. He died in Caracas at the age of 55.