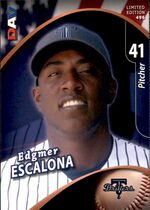 Edgmer Escalona is a relief pitcher who made his major league debut with the Colorado Rockies in 2010.

Escalona split the 2009 season between the Modesto Nuts (28 games) and Tulsa Drillers (38 games), going a combined 3-2 with four saves and a 2.47 ERA in 59 games. He held opponents to a .211 average. Baseball America rated him as Colorado's #20 prospect and Edgmer was added to the 40-man roster.

He began the 2010 season with the Colorado Springs Sky Sox. He was called up to the major leagues in May, 2010, however was sent down the next day. He did not play at that level. He needed to wait until that September to make his debut, it coming on September 10th against the Arizona Diamondbacks, when he pitched a perfect 8th inning in a 13-4 win.